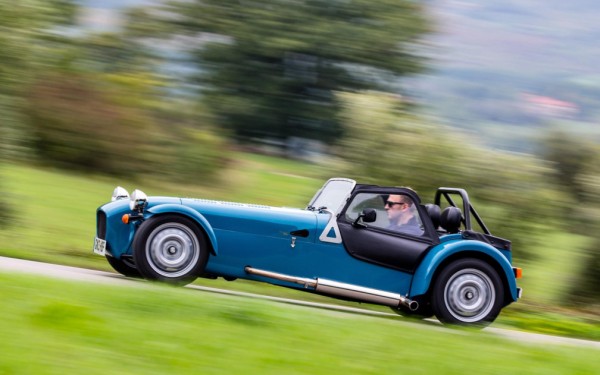 The production of the brand-new Caterham Seven 160, the firm’s first entry-level, eco-minded model, begins today in Britain. The 160 is an affordable Caterham designed for those who are not yet confident with their driving skills. And you do need an awful lot of driving skills to handle a full-fat Caterham.

The 160 is also one of the most economical sports cars you can buy. The open-top two-seater Caterham Seven 160 is powered by a 660cc turbocharged three-cylinder Suzuki engine, boosted by Caterham to make 80 horsepower.

Seeing as the Seven 160 weighs next to nothing, that measly 80hp is enough to take it from 0 to 62 mph in 6.5 seconds and on to a top speed of 100 mph. Not exactly a thrilling turn of speed, but enough to have plenty of fun.

What’s more, the lightness of the Caterham Seven 160 and the smallness of its engines results in astonishingly good fuel economy. The car does 57.6 mpg on the combined cycle and emits no more than 114g/km CO2.

The car is also very, very cheap, which is not a surprise, since it is very, very basic. I mean it has a live-axle rear suspension, so you get the idea. The Caterham Seven 160 can be yours for £14,995 in component form and £17,995 fully built. They also do a 165 version for the European market. The number five at the end of the EU spec car’s moniker means it complies with the EU5 emissions standards.