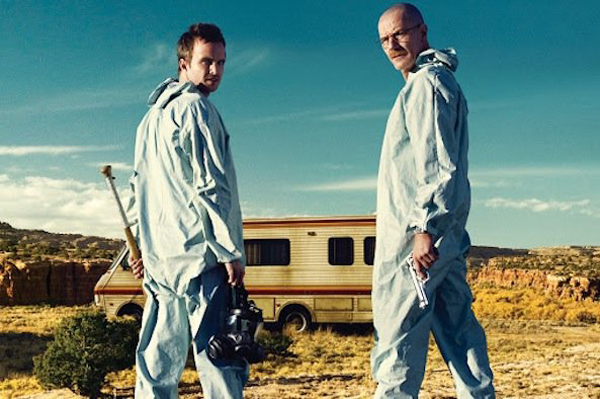 There are very few people I know who haven’t watched the American drama/comedy, Breaking Bad. In fact, most are addicts, and those who joined the party late are bathing and submerging themselves in DVD box set marathons to catch up.

Breaking Bad is a series capable of hauling in viewers from every corner of the genre spectrum because its content covers all bases. You obviously have the crime and thriller elements due to the main crystal meth drug theme, whilst smaller doses of horror and sci-fi present themselves as gruesome murders and the drug making processes. 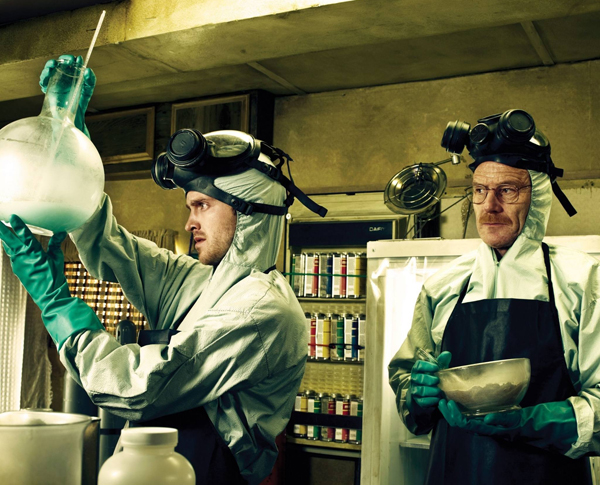 The writing is exceptionally clever, and the twists and turns are convoluted enough to leave any mystery buff’s head spinning. Sub plots include a lot of family dispute, and despite the main protagonist’s health and family dilemmas, the viewer is always on his side, no matter how far he is willing to go. The fact he played the hilarious father in Malcolm In The Middle may have helped with the series’ initial comedy elements, but I think it also did a better job at projecting the character’s transformation as the seasons passed. 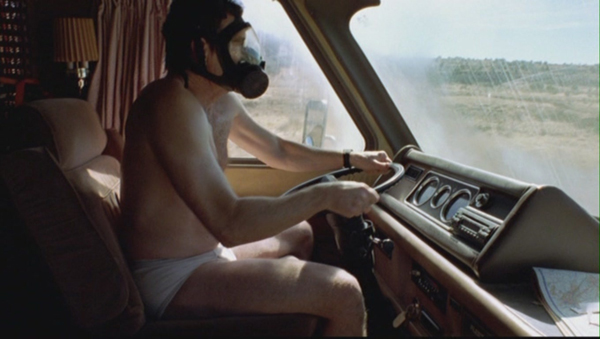 Not only is it superbly written and thought out, right from the opening scene of the first episode, it’s characters are a massive part of how that writing hits the ground running. They allow for excellent writing, great one-liners, plausibility in some of the plots… and vehicles.

Everyone knows certain cars have character and personality and the writers have allowed the casting crew great scope for finding some great cars. Dennis Milliken, the guy with the discerning automotive eye, did a fantastic job of matching the vehicles to the characters’ personalities. Even as the series progresses and certain characters transform, their vehicles are proof in the way their altered states are thinking and acting. 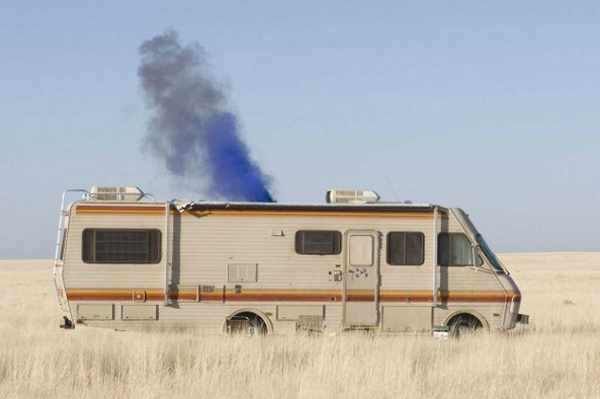 The first vehicle is obviously going to be the star of the show, and thanks to Breaking Bad, any aging RVs are now joked about: “Probably a meth lab in there,” says anyone on any of the social media sites stumbling across a picture of an RV. 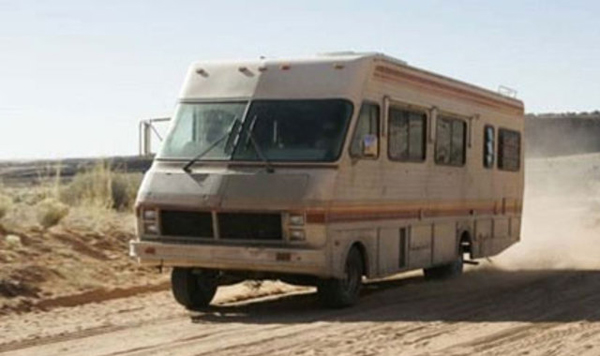 The rolling meth lab is actually a 1986 Fleetwood Bounder. Not always used throughout the series, it does crop up from time to time like that old, distant, familiar… well, any of those clichés work for this old dog. 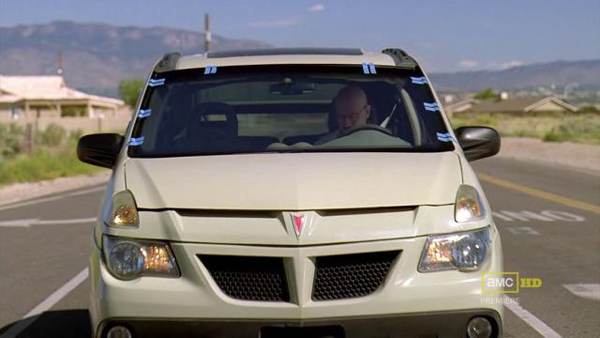 Whilst the main protagonist, Walter White spends his time “cooking” inside the RV, his family and daily driver is a rather dull and ugly Pontiac Aztek. Unfortunately for Pontiac, their Aztek was meant to be a design renaissance for GM – it even made the top 100 ugly cars poll. It is, however, a probable car of choice by any geography, history, maths or science teacher (the latter being Walter’s job before it all goes wrong).

That said, I bet sales increased after a few series of Breaking Bad, especially in that colour – “Farm Green” is what the salesman called it – fitting since it resembles the stuff that comes of cows (not milk). 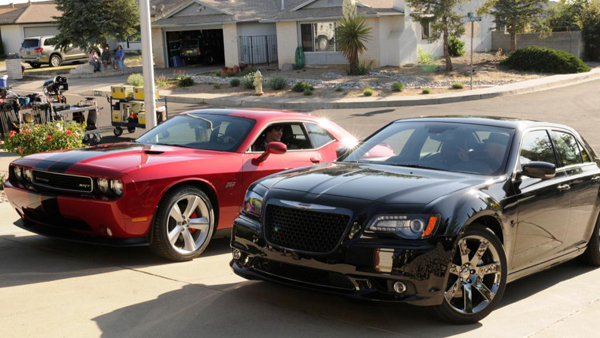 As the seemingly innocuous Walter transforms into a cold and calculating drug lord known as “Heisenberg”, and after the green paper accumulates into a mountain, Walter takes Walt Junior car shopping. For himself he purchases a 6.4-L Hemi V8 470-bhp Chrysler 300 SRT8, and for his son, after feeling guilty about initially gifting him a P.T Cruiser, he gives Junior this Dodge Challenger SRT8. 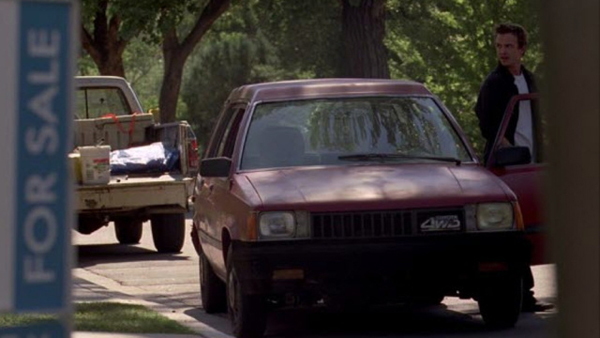 This beat up and sun-faded wagon belonged to Walter’s sidekick, Jesse Pinkman, a small time dealer who finishes nearly every sentence with, “Bitch”. It suits the character so well that despite hitting it big with Walter and buying a Chevy Monte Carlo, he still continued to use it throughout the series.

As I highlighted earlier, the writers did a good job with character development, as when Jesse has a breakdown and is loaded with cash, he still takes the old favourite for spin, throwing bundles of cash from the Tercel’s window. 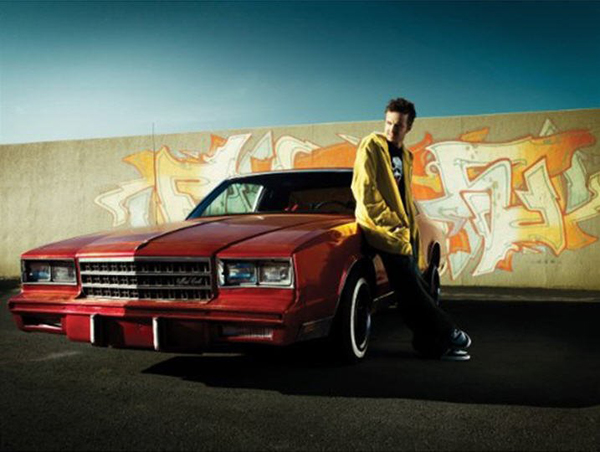 This is the aforementioned ride Jesse buys with the proceeds of the crystal meth money. At the time of purchase, when all was good and well, it suited Jesse’s character and attitude perfectly. 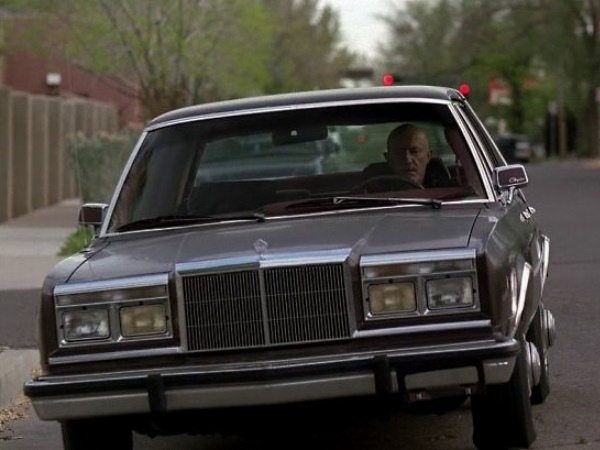 This former cop turned hitman, enforcer, cleaner and fixer drives a cool retro New Yorker. Mike Ehrmantraut is a man with a dead stare and a tough exterior and only an old school New Yorker will cut it. 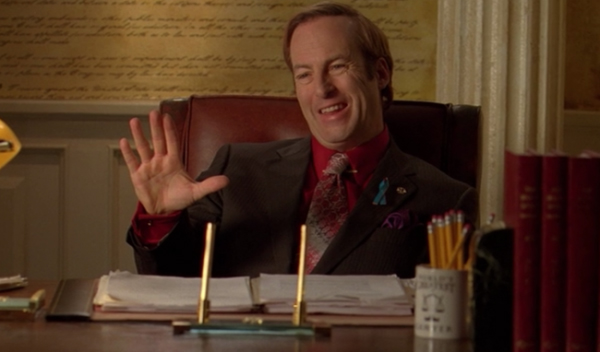 Saul Goodman is my favourite character, the ultimate underhanded lawyer. Whilst his ego and exterior are inflated and flamboyant, his true nature is one of selfishness, greed and cowardice. What other car would a lawyer float around town in? His white Caddy suits him as much as his license plate “LWYRUP”, his catch phrase, “Better Call Saul”, and his fantastic one-liners. 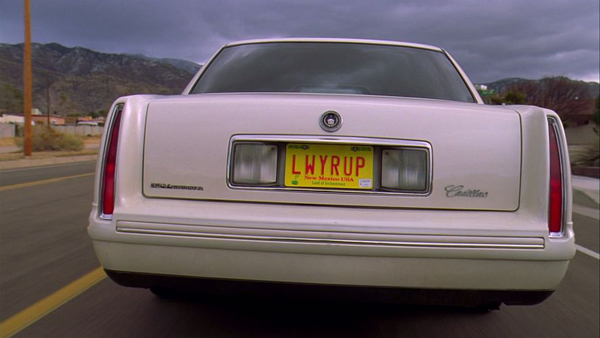 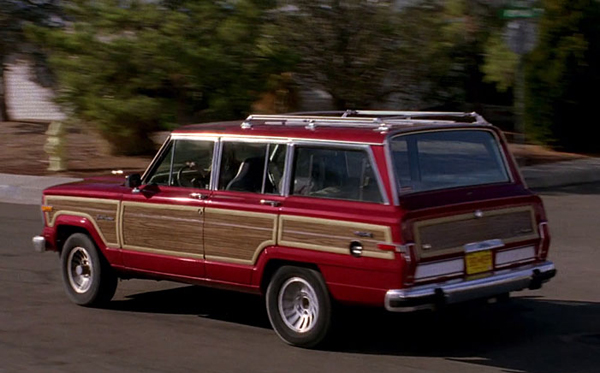 Walter’s wife, Skyler drove a very fitting family mobile. This wooden panelled Jeep is the vehicle of choice for a mother who has no knowledge of her husband’s drug empire. However, when she is on to the bigger picture, she eventually changes it to a boring and generic Ford Edge. 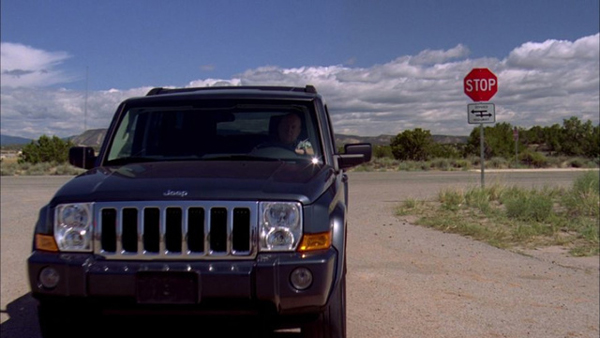 Hank Schrader is Walter and Skyler’s brother-in-law. Ironic and a little awkward for Walter is the fact Hank is a Special Agent for the DEA and ends up working on the case revolving around “Heisenberg” and the potent blue crystal meth making the rounds.

Although in reality the government issued the DEA The Jeep Commander, it suits Hank’s no nonsense, hardball personality down to the ground. 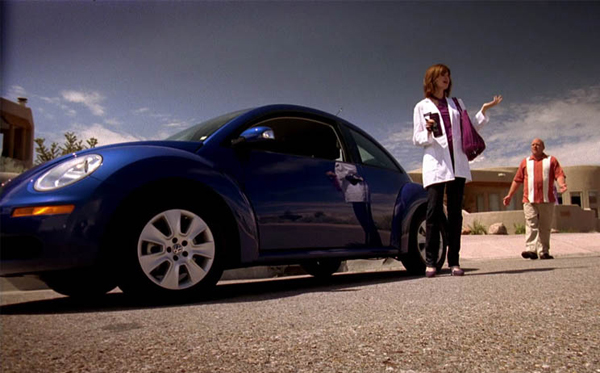 Although the VW is a bit dull in comparison to the above, Dennis Milliken managed to hit the nail on the head with Hank’s wife, Marie. Unlike Skyler, she has no children and works as a Radiologic Technician. She is more independent and can drive what she chooses, so apart from perhaps a Mazda Miata (MX-5), this sparkling yet sensible Beetle is the perfect choice. 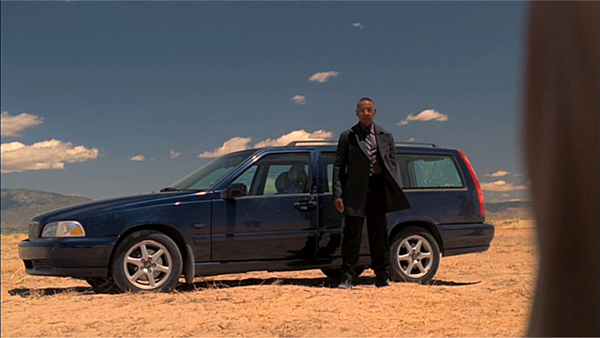 In the movies drug lords usually cruise around in limos, supercars or musclecars. The fact Gustavo Fring drives the ultimate family wagon only strengthens the show’s plausibility – in the real world a respected restaurateur, business magnate and ruthless drug lord such as Fring would duck the radar by selecting a Volvo. 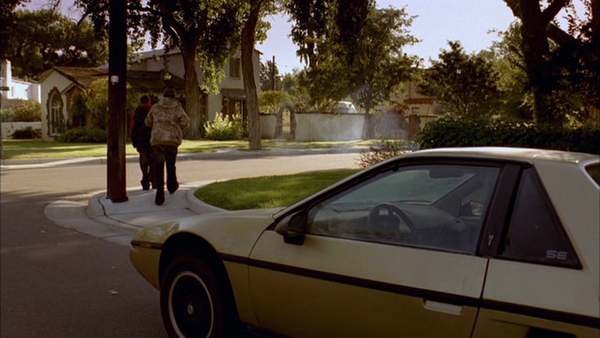 Brandon Mayhew, best known as “Badger”, is one of Jesse’s stoner friends. When he’s not breaking the conditions of his probation getting high, he also dabbles with the meth making process with Jesse.

He’s that guy who still reads comics and so desperately wants to be cool but will never become anything in life, so to make up for not owning a muscle car or Ferrari, the Pontiac Fiero will have to do. 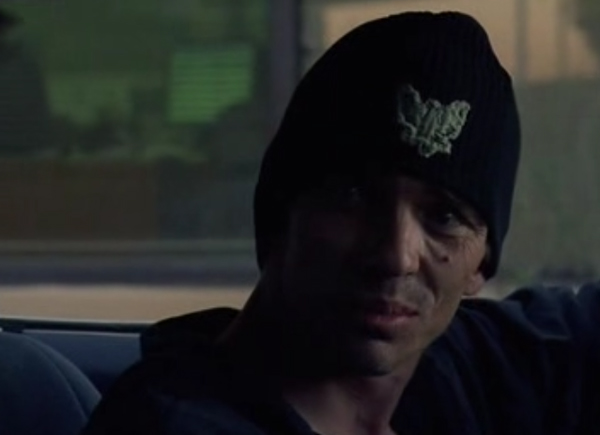 Skinny Pete is also one of Jesse’s long time buddies, and although he’s goofy looking and comes across as stupid, he sometimes displays great insight and surprising intellect. You rarely get to see it, but I managed to find it and take a screen shot of his pale blue Thunderbird as Pete picked up Jesse from the hospital. 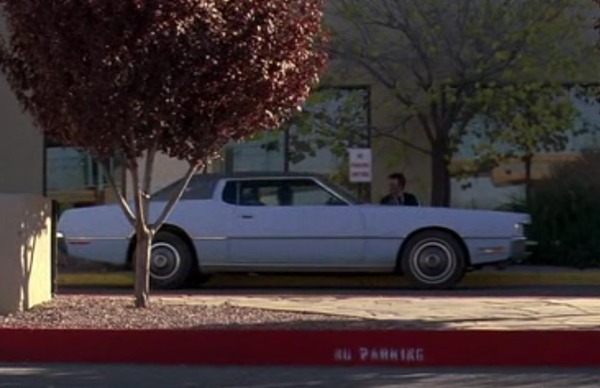 If you haven’t seen the show, I highly recommend it. This was written with you in mind, so whilst hardcore fans may point out I’ve missed out stuff, I avoided too many significant spoilers in deeper analysis of the models chosen.

One real warning though: Once you have sampled BB, it’s just as addictive as Heisenberg’s blue crystal meth.