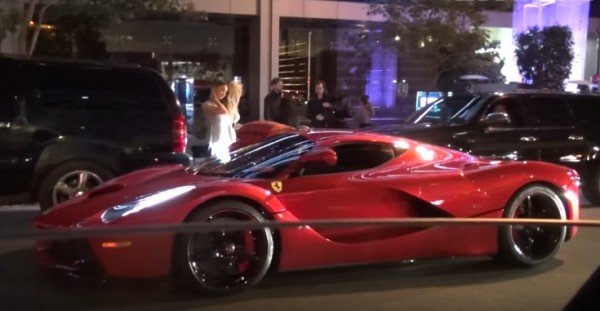 Lewis Hamilton, as you know, is a Formula One champion. But his involvement in music – and of course his piles of cash – has gotten him places no other F1 star has ever ventured before. This weekend he was spotted in Beverly Hills, hanging out with one Justin Bieber and giving him a ride in his Ferrari LaFerrari. Apparently, they were looking for a good place to have dinner.

All that is left for Lewis Hamilton to accomplish now is to be on an episode of The Simpsons. Then he’d have it all!

This car, as mentioned, belongs to Hamilton and not Justin Bieber, although we had in the news that he’d ordered one. The boy’s a big fan of the Prancing Horse. He also has this wide body Liberty Walk Ferrari 458 built for him by West Coast Customs which you can see at the end of this video. What’s more interesting here is the way Hamilton has placed his hyper cars, so he’s never without one where he goes. He’s got the Pagani Zonda in Monaco, a McLaren P1 he uses in the UK I think, a Maybach in Germany, and now a LaFerrari in the U.S.