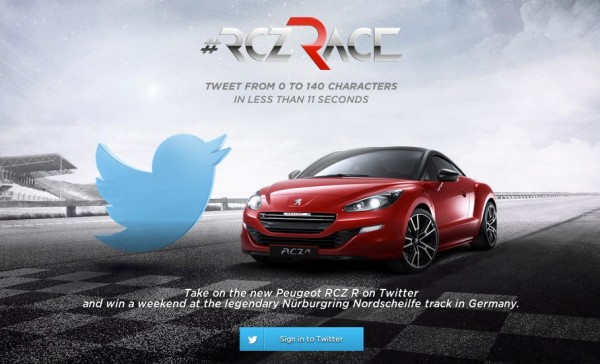 More and more car maker these days turn to social media website for free publicity, which is a good thing, because it means they will spend their ad money on awesome prizes. Well, sort of. Yesterday we told you about Scion’s social contest and its Comic-Con prize. Now Peugeot has come up with one, but their prize is a lot awesomer.

Peugeot RCZ R Twitter Challenge invites fans to write a 140-character tweet in just 11 seconds. That is the time it takes Peugeot RCZ R, the most powerful production car they’ve ever built, to go from 0 to 90mph. The Top 100 times will be entered into a prize draw for one lucky winner and a friend to participate in an ‘Ultimate Test Drive Experience’ at the Nürburgring Nordschleife circuit in Germany.

So if you are up for a nice weekend at the ‘Ring, which flights and accommodation for two nights, two tickets to the VLN Endurance Championship, and a test drive on the legendary circuit, look up hashtag #RCZRace on Twitter. The experience takes place on the 16th to 18th May 2014.

Peugeot RCZ R is the sportiest car in Peugeot’s range right now, boasting a 270bhp 1.6-litre four-cylinder turbo engine. Equipped with a Torsen differential and a bespoke aero kit, plus sport suspension, brakes, and wheels and tires, the RCZ R goes from 0 to 60 mph in 5.9 seconds. The top speed if limited to 155 mph.