The story of Fisker is one of the saddest in the history of cars. What started as a promising and noble project to save the planet and people’s dignity by making cool and desirable green cars by an industrious designer called Henrik Fisker turned into a complete and utter failure rather quickly. Still, what we have here may cheer up those few who bought a Fisker Karma and now feel like losers!

What we have is a Fisker Karma wrapped in a super unique Blue Chrome by the guys at Metro Wrapz in Miami. They’ve got plenty of sun over there and the owner of this car obviously wanted to put that sunshine into good use. So he went for this extremely brash color that shines and shimmers in the sunlight like a gem.

So there you have it. If you can’t look at your Fisker Karma without remembering that it is now pretty much worthless, have it wrapped in a cool color. It is a good distraction.

Meanwhile, businessmen in China are trying to work out if they can restart Fisker’s production without losing huge piles of cash. Even if they manage to bring it back, it is not likely the Karma get the same attention as it did when it was first introduced. Even Leo DiCaprio, who was huge advocate of Fisker’s way, is disappointed in them. He  hangs out with Formula E guys now. 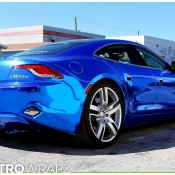 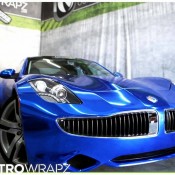 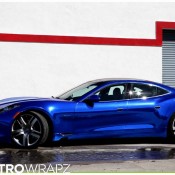 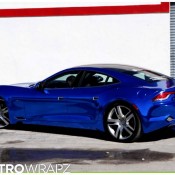 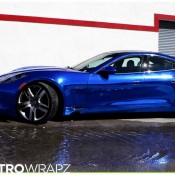 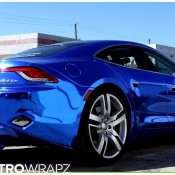