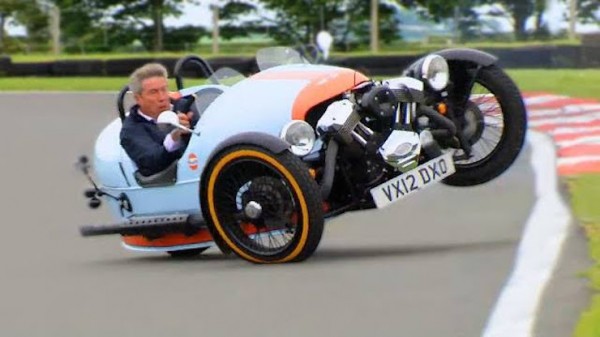 This is a clip from a relatively old Fifth Gear episode, but one that is worth another watch. In it Tiff Needell and Sabine Schmitz hit the track to test three bonafide British sports cars: Caterham 7 Supersport R, Morgan 3-wheeler and the Ariel Atom 3.5.

The part we are interested in the drifting contest where Tiff damn nearly kills himself trying to slide the Morgan 3-Wheeler. All we have to say is this: BIG cojones!

Tiff Needell is one of the original Top Gear presenters and the man who thought Jeremy Clarkson how to powerslide. Can’t imagine that was an easy task. Tiff’s an old man now, but age has not slowed him one bit. His colleagues on Fifth Gear – accomplished racing drivers like Vicky Butler Henderson and Jason Plato – are still afraid of riding in a car with Tiff because, and this is a quote, he is insane.

Insane or just amazingly taleneted, Tiff Needell is one jolly good fellow and one of the pillars of modern car journalism. We can’t wait to see him and the other guys back on TV in a new season of 5th Gear.