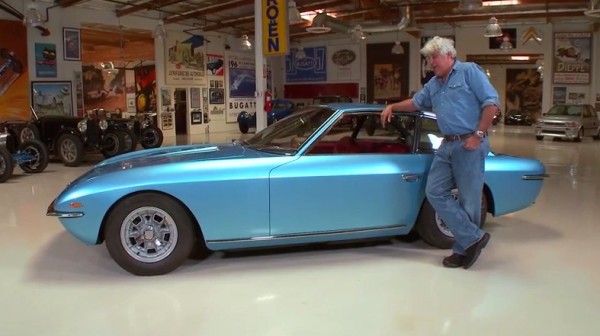 Lamborghini Islero is one those rare names in the car world, the mere mention of which is a cause for our intense attention. What we have here though is something a lot cooler, seeing as the Islero in question here is the private property of one Adam Carolla, and he’s brought it to a certain garage called Jay Leno’s!

This, then, is a completely unmissable episode of Jay Leno’s garage, if not for the fact that it features a nicely restored Lamborghini Islero, for the hilarious conversation between the two comedians.

Adam has lavished a lot of love on this Lamborghini Islero; a fact that you can tell by his choice of color, the attention to every little detail, the neat chrome work, the magnificently clean engine bay, and the interior. The Islero has one of the most iconic designs ever, what with the pointy front end and the long bonnet. Too bad they only built 125 units of it.