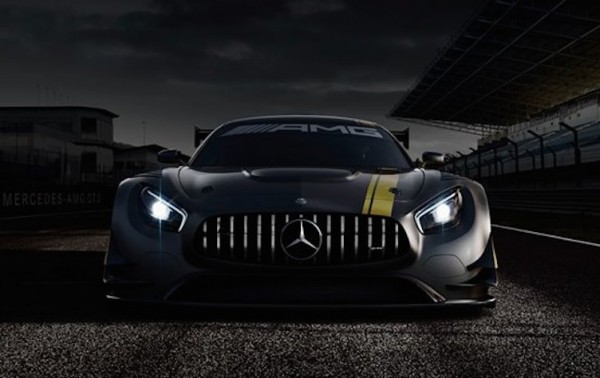 About a week ago Mercedes-AMG released a couple of sketches announcing the launch of a racing version of the AMG GT sports car at the Geneva Motor Show. They have been more generous with the second teaser though, revealing basically the first proper image of Mercedes AMG GT3.

The GT3 looks a lot more aggressive and, well, awesome than we were expecting seeing those early drawings. The car features a massive new grille that look like the teeth of a predator, and extremely wide hips which are necessary to accommodate the huge racing slicks it is sporting.

We can also discern a pretty massive aero kit in this picture, consisting of a prominent front splitter with little winglets on the sides and canards and everything, vented bonnet, rear wing, and, presumably, a big rear diffuser. The looks of the Mercedes AMG GT3 could inspire tuners in making aftermarket body kits for the road-going versions.

Technical details of Mercedes AMG GT3 are yet to be revealed, but since it is slated to compete in the FIA GT3 series, do not expect anything crazy. A 600-hp version of the existing 4.0 liter V8, a sequential transmission, and heavy duty axles are among the likely changes over the standard car.