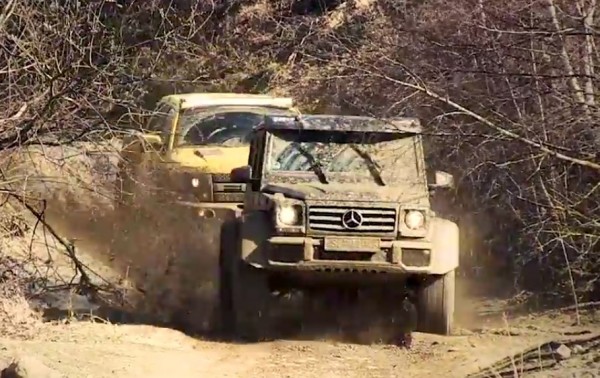 Their TV show might have been canceled, but Top Gear is still one of the world’s top motoring magazines. Which is how they managed to secure this exclusive off-road head to head test in which they pit the new Mercedes G500 4×4 against the mighty Hennessey Velociraptor.

In this video Tom Ford and some other guy play around in the mud with the two extreme off-roaders. It is a brilliant film, but unfortunately it has received a ton of thumbs down on YouTube from Clarkson fans who believe Top Gear should close its doors now that Jezza’s gone.

Top Gear has developed quite a taste for big, powerful American pickup trucks ever since Jeremy drove the Hennessey Velociraptor in the last aired episode of Season 22. So it seemed like the perfect candidate to take on the hot new Mercedes G500 4×4, a four-wheeled version of the G63 6×6. There is no question that 4×4 is the cooler car here, but as to which is one is a more capable off-roader, you are going to have read the next issue of TG magazine to find out.

Mercedes G500 4×4 is powered by a 420 horsepower twin-turbo V8 engine, whereas the Hennessey Velociraptor has a 600 horsepower supercharged V8