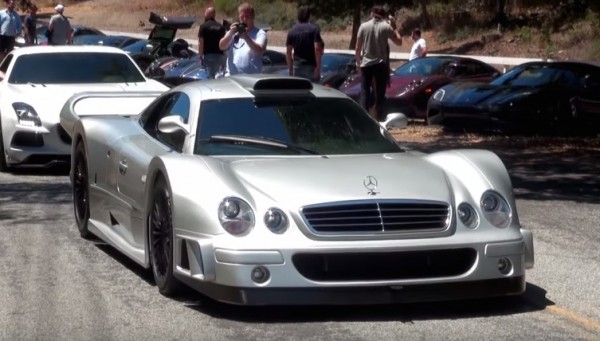 Over that past few days we brought you two galleries from two amazing supercar rallies organized around Monterey Car Week. One was the Fuel Run 2015 and the other McCall’s Motorworks Revival, and what they had in common was the gracing presence of a super rare Mercedes CLK GTR Super Sport.

Well, the CLK GTR is the sort of car that definitely deserves a closer, one on one look. Sadly, this is not going to be one of those in-depth videos, but BrianZuk managed to get close enough to the car to record its awesome soundtrack:

Limited to just 25 units worldwide, Mercedes CLK GTR AMG Super Sport is the street version of the CLR Le Mans racer, built for one reason alone, and that was because Le Mans regulations required the race car to have a road-going version. So it’s fast, very fast, and unbelievably impractical. The CLK GTR is more of a collectible item than something you can challenge the likes of Bugatti Veyron and Ferrari Enzo in. The car will get stumped at the sight of the first speed hump.

Mercedes CLK GTR these days command a multi-million dollar price tag. But if you want something even more rare and even more expensive, search for a Roadster version of which only five units were ever produced.