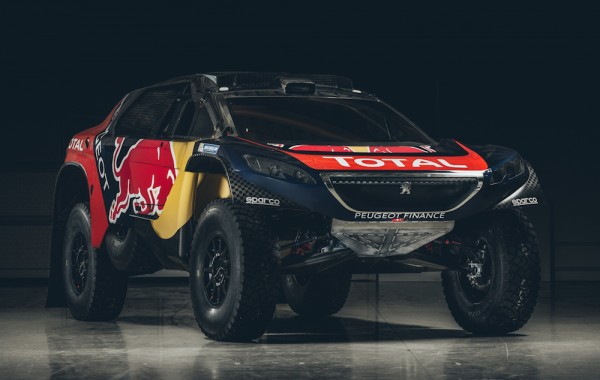 Following a number of previews and official introductions, the awesome Peugeot 2008 DKR rally car has now been unveiled in full competition mode, complete with the 2016 Rally Dakar livery it will be sporting at the event. Red Bull colors suits the DKR rather well.

Wider, faster, lower and more powerful than its predecessor, the 2016 Peugeot 2008 DKR Dakar racer will be piloted by a star-studded team, including Sébastien Loeb, Stéphane Peterhansel, Cyril Despres and Carlos Sainz. These world-class drivers will have a very well-engineered car under them, thoroughly tested in a variety of conditions.

Peugeot Sport seems pretty determined to do well at next year’s Rally Dakar. One sign that indicates that is the thought they have put into the livery you see on Peugeot 2008 DKR. While the color of the sponsors adorn the body panels, the roof of the car is finished in silver to reflect the harsh sunshine of the Argentine summer and keep the cabin nice and cool. That’s simple and clever and could have a huge impact on the performance of the drivers and navigators. 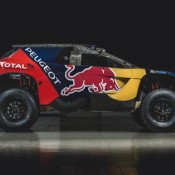 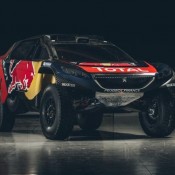 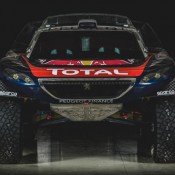 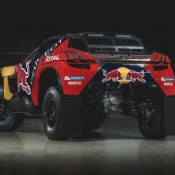 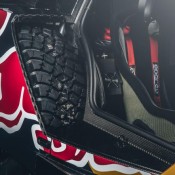 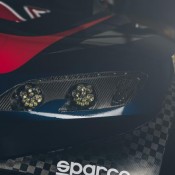 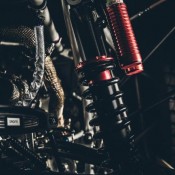 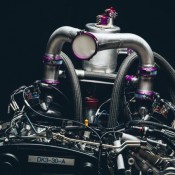 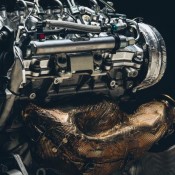 Peugeot Sport director Bruno Famin commented: “If the car goes as well as it looks, then we are certainly set for a strong year next year! In its definitive livery, the new Peugeot 2008 DKR16 looks like it’s going really fast even when it’s standing still. We know that our cars will definitely have a strong visual presence on the Dakar: now it’s down to us as a team to make the most of that.”