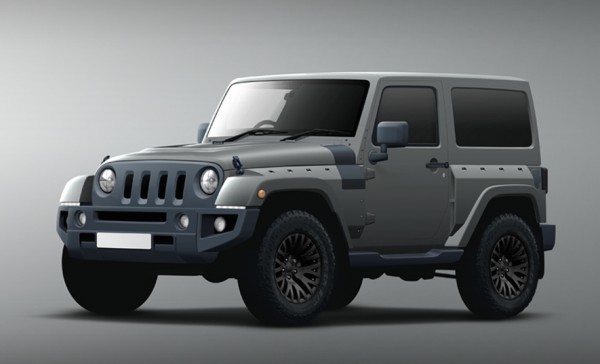 Kahn Design’s booth at this year’s Geneva Motor Show is shaping up to be quite a spectacle. Besides the unique Aston Martin-based Vengeance Flying Huntsman 110 6×6 Defender Double Cab Pickup, the British firm is also bringing this, Jeep Wrangler Black Hawk, to the show.

Now, as you can see in the picture Kahn’s Jeep Wrangler Black Hawk is sort of matte grey. But that’s not the point. When this package becomes available you’ll be able to choose whatever color you want. Black Hawk refers to the styling package which is a new take on the tuner’s Chelsea Truck Company CJ300 kit we’ve featured here a number of times.

So Jeep Wrangler Black Hawk comes with new and very well-designed grille and bumpers, sexy new side panels including front wings and rear fender extension, new side steps, sport hood, Kahn RS wheels, and, one would imagine, an interior package with items such as sport seats, Kahn steering wheel, diamond-stitched leather upholstery and a Churchill clock.