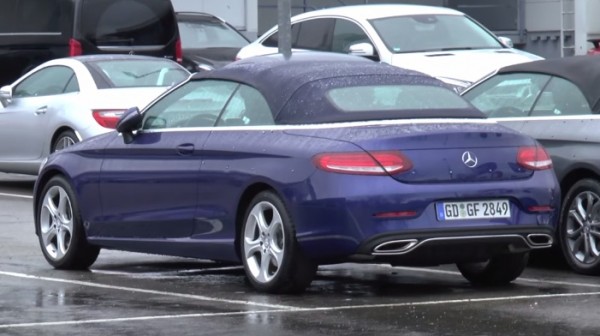 All the effort Mercedes-Benz has been putting into teasing the new 2017 Mercedes C-Class Cabriolet ahead of its premiere at the Geneva Motor Show is now ruined thanks to this spy video. The drop-top C was caught undisguised at a factory parking lot, rocking a nice blue color and a fabric soft-top.

We do hope the new Mercedes C-Class Cabriolet looks better with its top off, because as you can see the roof is rather weird when it’s in place. It seems a bit too big, like a hat that doesn’t fit very well. That is perhaps for headroom concerns, but it’s not a good look. Of course, it’s not that big of a problem, since this car was conceived as a Cabriolet which means you have to judge it as a roofless car.

Mercedes has gone to an enormous length to make sure the drop-top experience of Mercedes C-Class Cabriolet is as good as it can be. The car reportedly comes with new a new version of the AIRSCARF neck warming system with air vents in the headrests, and something called AIRCAP automatic wind protection system which reduces air turbulence inside the cabin to a minimum.

The new C-Class Cabriolet will be revealed this month prior to its world debut in Geneva where it makes debut alongside the new C43 AMG Coupe.