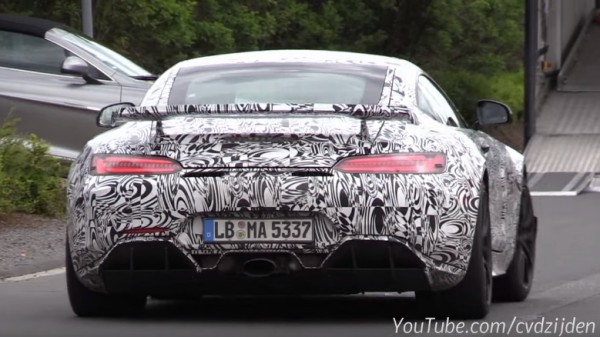 It is hardly a secret that a new, ultra-high-performance version of the Mercedes AMG GT is in the works. Wether it’s called the GT-R or Black Series or whatever is yet to be confirmed, but judging by the latest spy footage showing the car in action on the road, this thing’s bangin’!

Or rather it’s booming, because of its exhaust noise. Unlike the regular GT, Mercedes AMG GT R apparently has a single central tailpipe but it makes a much greater noise than the quad system of its low-fat counterpart. That is because this pipe is connected to a heavily upgraded V8 engine developing around 600 horsepower. That is also the reason the R boasts a massive, and frankly rather ugly, aero kit:

This video was shot by Cvdzijden around the Nurburgring which explains the presence of those peculiar Porsche Cayman safety cars.