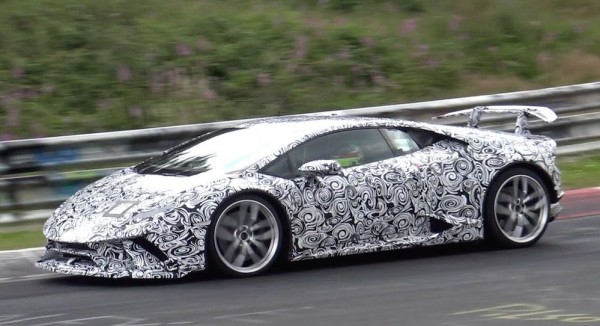 Spotters and spy photographers hit the web yesterday bearing the news of sighting something incredible at the Nurburgring. They caught on film a fully-camo’d, fairly hard-core looking beast which could be the next Lamborghini Huracan Superleggera.

It makes sense, you know. As with the Gallardo, Lamborghini first came out with the Coupe, then the Spyder, after that the rear-drive 580-2, and now it is the turn of Lamborghini Huracan Superleggera to come out and after that we can expect a whole bunch of special and limited editions. The Huracan, like Gallardo, has a ten-year lifespan, so there’s ample time for Lambo to try many different things with it.

The new Lamborghini Huracan Superleggera, which may now even be called that when it’s ready, will have a familiar recipe. It’ll be, basically, an Huracan that’s been lightened and equipped with a track-focused aero kit and its tweaked engine produces between 10 to 20 extra horses. The combination of a tighter chassis, lighter weight, better aero and more power will turn the Superleggera into a completley different beast though, which is why it is going to cost considerably more than a run-of-the-mill Huracan coupe.