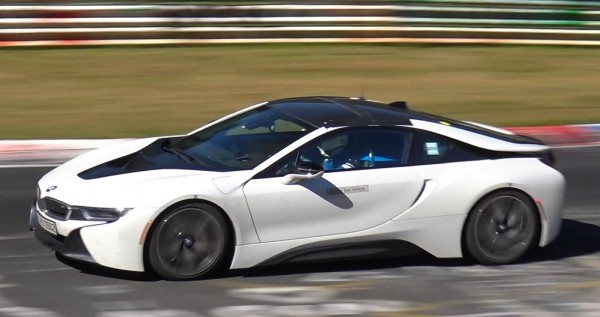 BMW i8 Convertible – or Cabrio, or Spider, or whatever you want to call it – is one of those cars with many question marks hanging above it. It makes total sense for BMW to make it and, judging by what we see in this spy video, they are entertaining the idea. But it still isn’t a sure thing.

A reason for that could be the ‘i’ department’s grander plans for the expansion of their lineup. They might prefer to come up with something from the ground up if they want an open-top model rather than chopping the top off of the i8. In that case, the BMW i8 Convertible you see here is just a mule for something totally different (i6 maybe?).

Then again, BMW has already made an i8 Spyder concept which means they’ve been flirting with this idea since day one. If we go with this approach then this prototype is the real deal and you can expect the production BMW i8 Convertible to have a sort of Targa top arrangement with a removable roof. Hopefully the production unit is not held together with gaffer tape!