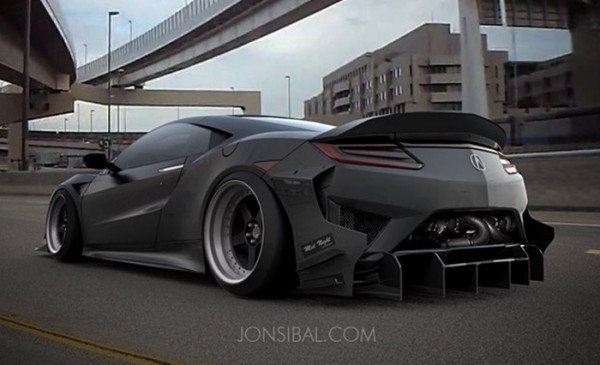 On this episode of Virtual Tuning we want to take a look at another one of Jon Sibal’s “quickie” renderings in which he imagines what a trendy car would look like if it was subjected to extreme visual modifications. The result of these musings this time is this rather frightening custom Acura NSX wide body.

Earlier we showed you a matte black NSX and told you that it would be a good place to start modifying the new Japanese/American sports car. In that case Sibal’s custom Acura NSX represents the last stage of tuning in which you have not only modded the body to the very limit, but also upgraded the engine by adding, judging by those massive pipes sticking out the diffuser, a custom twin-turbo system complete with bespoke exhaust and everything.

The styling kit alone on this custom Acura NSX Wide Body is worth studying how it can be made into a real aftermarket package. It is not a full, Liberty Walk-style wide body with stick-out, bolted-on fenders, but rather a more subtle take on the whole idea. The fenders are flared just enough to house those huge wheels and to complement the awesome new bumpers with their carbon aero parts. This is about as naughty as the new NSX can get.