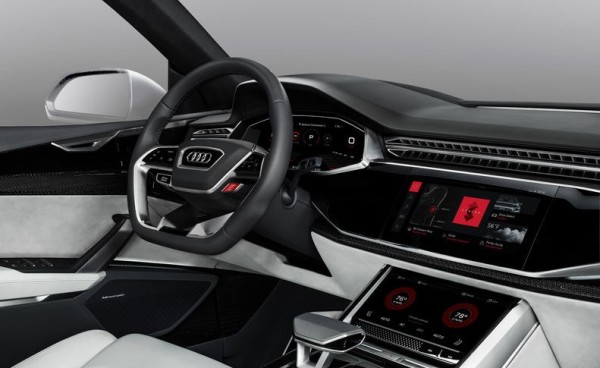 After Volvo, who have partnered with Google to make their own Android infotainment system, Now Audi announced they, too, have come up with an integrated Android operating system for their future in-car connectivity needs. Audi’s system will be showcased in the Q8 Sport Concept at Google I/O developer conference which starts today (May 17).

Here’s a brief overview of what Audi’s Android infotainment system looks like in action. As with other Android-based systems, apps are the main highlight:

The Android infotainment in Audi Q8 Sport Concept offers apps such as streaming service Spotify, Google Play Music and Google Assistant, plus Google Maps which could replace Audi’s own navigation system. Of course, all of these are available on your phone, but the beauty of this system is that it integrates all these online services into the car’s MMI system which means you cna use them driecly from the touch display in the center of the dashboard. Now this could prove a little distracting constantly fondling your screen as you drive along, but hey, this is what people want right now.

As Audi clarifies: “The seamless integration of Android harbors tremendous potential. Android is the world’s most popular mobile platform with more than 1.4 billion active users worldwide. The open Android community’s immense breadth of expertise and creativity can speed up the development of new applications. New apps can quickly find their way into the cars as additional connected services, for example, if they fulfill the requirements of Google and Audi. The foundation for this is the Android platform. Other customer advantages alongside shorter update cycles include a significantly greater diversity of services as well as broad international availability. “