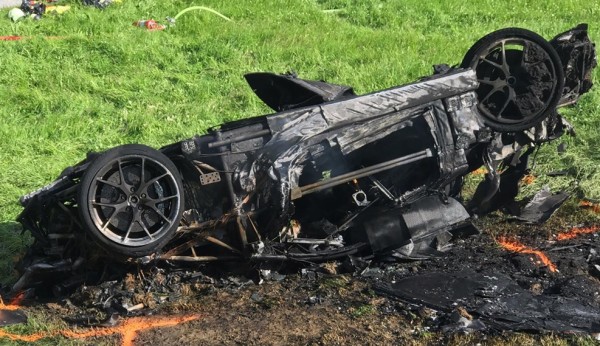 Yes, Richard Hammond has been involved in yet another crash while filming, this time in Switzerland where he totaled a Rimac Concept One with an estimated value of £2 million. Hammond was choppered to a hospital after the incident, but fortunately he hasn’t suffered any major injury apart from a fractured knee.

The accident, the cause of which is yet to be determined, happened during the Hemburg Hill Climb. As you can see in the footage below, Richard Hammond may have taken the bend at the end of the straight there a little too quickly, as a result of which the Rimac – a hugely powerful electric hypercar – spun out, hit the guardrail, and ended up on its roof. Hammond managed to climb out of the car just before, according to the official Grand Tour statement, the electric car burst into flames. A lucky escape for Hammond who is no stranger to fiery crashes.

Not to question Richard Hammond’s driving skills in any way, but if you look at his track record since that massive jet car crash on set of Top Gear a few years back he’s been crashing cars left and right on the set. In one of the Perfect Road Trip DVDs he made with Jeremy Clarkson, after crashing a Jaguar F-Type, Hammond acknowledges this himself, saying “It’s always me!” At any rate, We’re glad Hamster is OK and we can’t wait to see him on TV in the new season of The Grand Tour which is set for release on Amazon Prime in October. 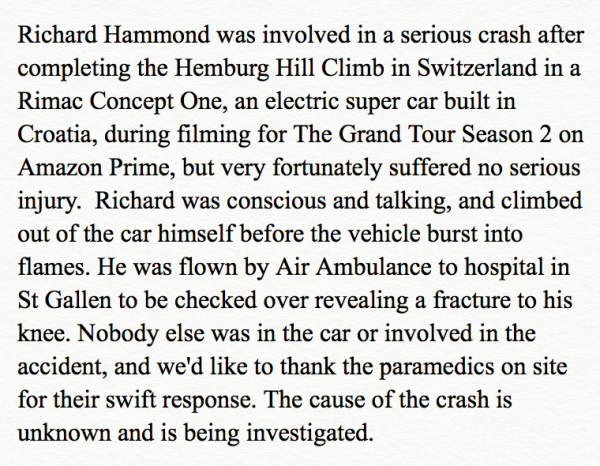