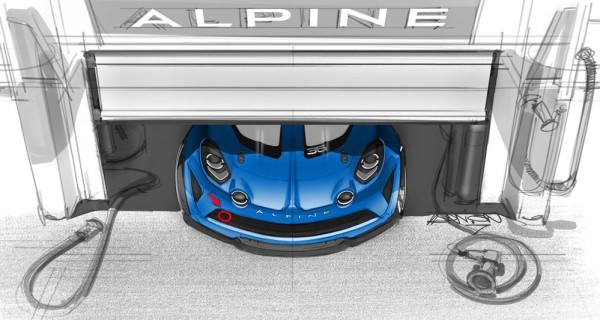 While we are waiting with bated breath for the release of the new Alpine sports car, the French company revealed they are making a racing version of the car and it’s going to be ready for competition this fall. The Alpine A110 Cup race car will get its own dedicated Alpine European Cup series in 2018.

That is truly exciting since Alpine Cup could be the first racing series we’d be looking forward to follow in a long time. The racing itself aside, we’d love to watch a whole bunch of Alpine A110s slug it out on the race track, especially as the cars will be identical and the battle will be really close. Another reason we’re excited about this is due to the teaser image they have released for Alpine A110 Cup, showing a wide-bodied A110 with a racing kit and it looks absolutely awesome.

Having its own racing series benefits the Alpine sports car in more ways than one. Not only will it enhance the reputation of the brand and its prestige, motorsport has always been the best place to test out new ideas and technologies which will invariably affect the production models. What’s more, the Alpine A110 Cup could inspire a few special edition of the A110 road car or even result in creation of some really cool aftermarket body kits that mimic the look.