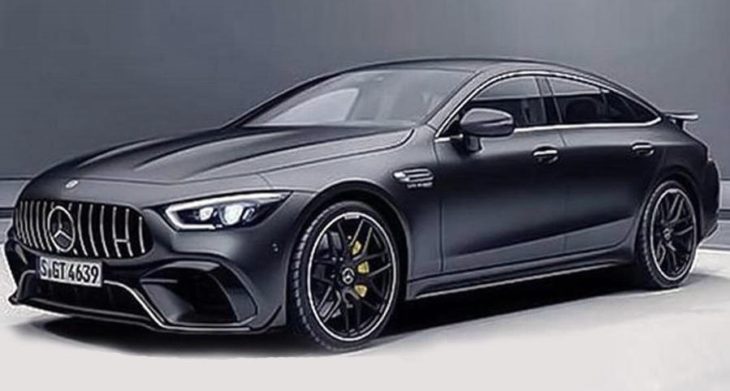 Tomorrow at the 2018 Geneva Motor Show we will get to see the all-new Four-Door Mercedes-AMG GT Coupe in full official glory. But unauthorized early looks are always more fun, so here’s your first glimpse of the new Mercedes gran turismo.

The car is officially called the Four-Door Mercedes-AMG GT Coupe, which is a bit self-contradictory. But in any case, the four-door version of the AMG GT supercar is designed to tap into the market currently dominated by the Porsche Panamera. It is decidedly less dramatic than the concept version we saw at Frankfurt Auto Show last year, but still looks pretty cool for what is essentially a family saloon.

The main characteristics of the Four-Door Mercedes-AMG GT Coupe include an aggressive front apron with large air intakes, chin spoiler and the all-important Panamericana grille, slimmer headlights than the two-door version, muscular bonnet, wider hips, a round rear-end and a fixed rear spoiler which to be honest is a tad unsightly. If you are wondering what is the point of a four-door AMG GT when Mercedes already has the CLS63 AMG, well, how’s more power as a conversation starter? Whereas the most powerful AMG V8 currently churns out just over 600 horsepower, the 4-door AMG Coupe could have as much as 800 horses!

Whether that’s true or just a wild internet rumor, we shall soon find out. Stay tuned for more on this civilized beast over the coming hours…