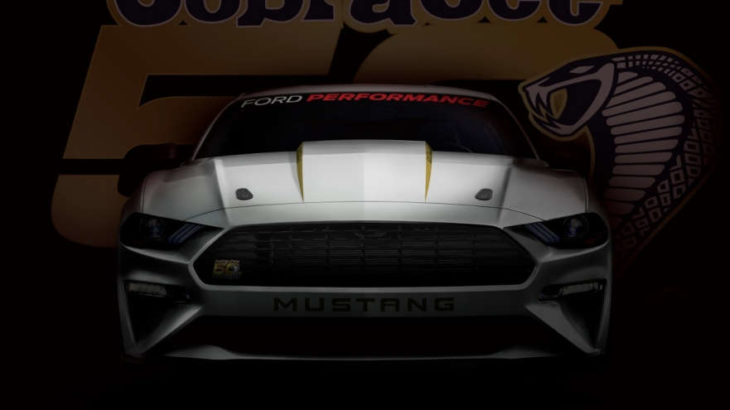 Ford, it turns out, has a lot of racing plans for the latest Mustang. After confirming that they are sending the pony to NASCAR tracks next year, they have now announced the 2018 Mustang Cobra Jet Race which is a turnkey dragster. The car marks the 50th anniversary of the legend.

The production of 2018 Mustang Cobra Jet is limited to 68 units, powered by a a supercharged 5.2-liter Coyote V8 tuned by Ford Performance experts. They haven’t revealed the power figures, but the quarter-mile is said to be in the mid-8-second range at 150 mph, meaning that figure is pretty huge. Other performance highlights include unique four-link rear suspension, 9-inch solid rear axle from Strange Engineering,  NHRA-certified roll cage, Racetech FIA seats, and a drag race-specific coil-over suspension with specially designed Weld Racing wheels with 50th anniversary badging.

“From the very first Mustang Cobra Jets dominating the 1968 NHRA Winternationals to our modern-day Cobra Jet racers, the Ford Performance Parts team continues to build the Cobra Jet brand based on its success at the track over five decades,” said Eric Cin, global director, Ford Performance Parts. “That, in turn, has inspired generations of Mustang fans to create their own performance machines for the street.”