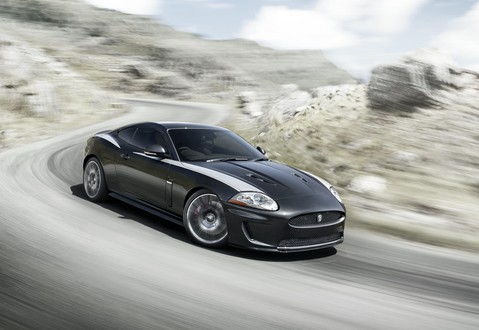 At 2010 Goodwood Festival of Speed Jaguar will unveil the new XKR 75 super coupe, a special edition which marks the company’s 75th anniversary. This model is limited to 75 units, obviously, and features a unique Stratus Grey finish, Red brake callipers and 20-inch gloss Vortex rims, while you can also order some graphics for it just like the picture above.

It also gets a semi-active sports exhaust system for an even nicer soundtrack.

To cope with the extra power, XKR75 comes with a re-tuned chassis featuring revised suspension and an aero kit for the body consisting of a front splitter, side sills extensions, a rear diffuser and larger rear spoiler. Inside the cabin new items exclusive to the 75 include Charcoal with ivory stitch, piano black finish to facia and centre console and a Jet suedecloth headlining.

Mike O’Driscoll, managing director, Jaguar Cars, said: “The XKR 75 will provide owners with exclusivity, excitement and a hint of Jaguar’s great heritage. This is a fitting way to celebrate the sporting credentials of the XK marque in the 75th year of the Jaguar name,” he continued.

“We conceived the XR 75 as a sports car with a duality of character that makes it perfectly suited to driving across Europe to the Nurburgring, completing some very fast laps, and then driving home again, added Mike Cross, Chief Engineer Vehicle Integrity.

The unique features of the exclusive new XKR 75 include: