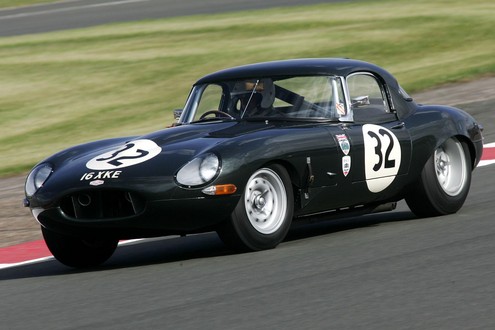 This year the magnificent Jaguar E-Type celebrates its 50th birthday. Obviously such an iconic and legendary car must get a special treat, so Jaguar owners clubs in the UK decided to throw a party for it at the 2011 Silverstone Classic with possibly the biggest assembly of Jaguar E-Types ever from all around the world.

With the E-Tyoe being a sportscar, the birthday party wouldn’t be complete if there were no races! So the weekend’s busy on-track schedule includes two races dedicated solely to competition versions of the Jaguar E-Type. With nearly 90 cars already registered with the Historic Sports Car Club (HSCC) organisers, a record grid of more than 50 race-prepared E-Types is predicted.

Launched in 1961, the legendary E-Type remains one of the most iconic, elegant and revered sports cars of all time and its golden anniversary will be honoured with a host of special races and displays at the world’s biggest classic motor racing festival.

The response has been remarkable with huge interest from the UK as well as abroad,” reports Grahame White, Chief Executive of the HSCC. “As the Silverstone Classic is held on the full Grand Prix circuit we will be able to start what’s almost certain to be the biggest grid of E-Types of all time – it promises to be a magnificent site and a fabulous celebration.”In total, more than a thousand racing and road-going E-Types are expected to join the golden anniversary celebrations at Silverstone and owners are being provided with dedicated infield parking areas and special ticket discounts, plus many other benefits. Notably the Jaguar E-Type Club has set up a unique ‘E50 Birthday Celebration’ weekend package to include a run through some of England’s most beautiful countryside, accommodation and a dinner dance in Shakespeare Country at Stratford-upon-Avon plus three day’s attendance at the 2011 Silverstone Classic.

“With so many E-Types on and off the track, it’s going to be a fantastic occasion – the world’s biggest and best celebration for one of the truly great sports cars,” says Nick Wigley, Event Director. “What’s more, the Silverstone Classic offers the perfect place and timing for the world to celebrate such an important milestone in automotive history. After all Jaguar designed and produced the E-Types just up the road at Browns Lane in Coventry and the very first UK sales commenced in July 1961. It’s going to be an absolutely amazing occasion – a party no classic car fan will want to miss.”

Highlighting the legendary Jaguar’s central role at this year’s Silverstone Classic, one of the very first Jaguar E-Types produced was featured on the event’s award winning exhibition stand earlier this month at the Autosport Show International.

The historic car on display was the 11th Jaguar E-Type car made, chassis number 850011 and will be one of the many contesting the two HSCC Jaguar E-Type Challenge races at the Silverstone Classic in July. These early pre-production cars were sold to selected customers who would race them, gaining valuable promotion. This car went to George Wicken, a successful Formula 2 driver who raced it throughout 1961 against the likes of Graham Hill, Roy Salvadori and Bruce McLaren and was one of only two E-Types entered for the 1961 TT at Goodwood. It now competes successfully in historic racing driven by owner Gary Pearson.

Highlighting the amazing mix of famous competition cars that will be racing alongside the E-Types at the 2011 Silverstone Classic, the display stand at the recent Autosport Show also featured a Maserati 250F from the Fifties, regarded by many as the finest Grand Prix car of all generations, as well as one of the famous V12 Silk Cut Jaguar XJR9s that took the famous British marque back to victory at Le Mans in 1988. Later in the year, both will be lining up on respective HGPCA pre-61 Grand Prix Cars and Group C grids at the 2011 Silverstone Classic. 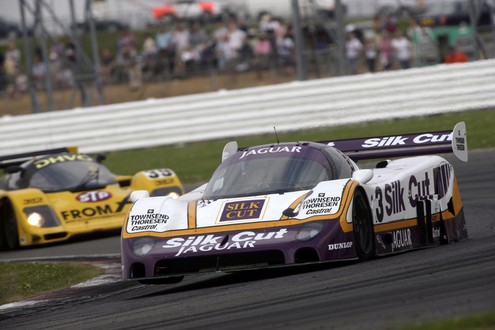