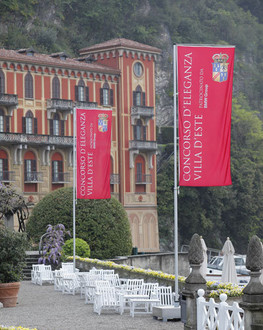 The lineup of concept and one-off cars at this year’s Concorso d’Eleganza Villa d’Este revealed by BMW who organizes the event. And as alwyas it’s full of amazing cars, and one very amazing model. The Ferrari Super America 45.

This bespoke model is the latest coachbuilt Ferrari built to order to a collector from New York. Details are currently scarce about this car, but apparently it is powered by a six cylinder engine and it’s a convertible. So don’t expect another Enzo-based supercar like Glickenhaus P4/5. We guess it’s more of a Riviera cruiser than a hard-knock track-focused Fezza. Still, can’t wait to see it.

This magnificent event which in fairness is the best and most interesting car show all year will be held On the weekend of 20 – 22 May 2011, on the Grand Hotel Villa d’Este and neighbouring Villa Erba in Cernobbio on Lake Como, Italy.

Here’s some more details on the aforementioned concept cars:

A recent and fascinating trend in the rarefied world of top end Ferrari collectors is the commissioning of one off bespoke version of high end models from Italian coach builders. Several ‘special clients’ have approached Pininfarina (and others) in recent years to build uniquely styled cars, an idea that goes back to the fifties went customers like film director Roberto Rossellini had a special car built for his wife, Ingrid Bergman. The Villa d Este is the natural setting for the exposure of such special vehicles and as well as the Glickenhaus P4/5 this year we have this very special Ferrari Super America belong to the New York

So up-beat was the Quattro Concepts reception at the Paris Motor Show last year that it seems highly likely a version of the car will eventually see production. It’s tough, compact look is inspired by the short wheelbase Quattro Sport of the eighties and indeed the car was built to celebrate 30 years of the ground breaking four wheel drive Audi Coupe. Styled by Wolfgang Egger it is a fully functioning prototype based on an RS5 chassis but shorter by 150mm to give more agility and that chunky presence on its massive 20 inch wheels. It features light alloy and carbon fibre to save weight and in fact it weighs almost exactly same as the Quattro sport homologation special of the eighties.

This concept takes its name from the traditional gun carrying cars used by the landed gentry for sporting pursuits but it is much more than just another estate car. With its powerful wheel arches – home to 20 inch wheels – and AMG style front grille it is essentially a variation on Mercedes successful CLS coupe/saloon theme, the squat roof extended into a load carrier with a fifth door. Strictly a four seater the shooting break has a modern take on traditional wood and leather treatments inside and is powered by a 306bhp 3.5 litre V6 petrol unit that is said to set new standards of economy in its class.

Introduced at Geneva this year the Etherea is a five door hatch back that manages to look like a 4 door coupe. With its futuristic and spacious cabin and aggressive stance this 245bhp hybrid drive cross-over is aimed at younger buyers than Infiniti’s traditional demographic. One of its most pleasing features, giving an aura of cool spaciousness, are the ‘clamshell’ doors; in other words the rear doors are hinged on the rearmost pillar and open to reveal open plan access to the cabin – there is no centre pillar, a feature of many classic sedans of the 20s to the 50s.

Ital Design/Giugiaro has a relationship with VW going back to the early seventies when it designed the bodywork for the firms first generation of water cooled models, the Passat, Polo and – most importantly – the first Golf. Now that the famous Italian styling house had been integrated into the VW group it was only natural that some exciting VW show cars would emerge. The GO! – shown alongside the sporty Tex at Geneva this year – is the latest ideas in the realm of the MPV, a genre Giugiaro virtually invented in the seventies with the Megagamma and the 1976 New York Taxi concept. Go! Is fully electric powered with battery packs under the seats offers large MPV space within a Passat sized wheelbase plus large glass areas and a full sized boot while retaining a resemblance to the rest of the VW family.

This extraordinary beach vehicle concept, powered by a 54kw electric motor, is designed to evoke memories of classic sixties and seventies fun cars like the Citroen Mehari and Fiat Jolly that one might have seen at St Tropez or other Riviera destinations. It can be open topped or, if it rains, there’s a typical canopy. Designed in Switzerland and seen for the first time this year at Geneva its maker describes it as a ‘grown up golf cart’ with Bamboo elements to its interior and a dashboard that can display Face book pages.

This dramatic electric powered coupe is one of the spearheads of Renault’s new more emotional design language under Laurens Van der Acker and is also a teaser for the brands future front end styling identity. It sets out to prove that electric powered cars don’t have to be earnest and boring with an exciting sculptural shape in Kevlar over a lightweight frame and an ethereal interior that features that now rarely seen item – the bench seat! Behind it sits the cars motor a batteries which give a 100 mile range.

This one-off was built by Pininfarina as a personal project for the American film director James Glickenhaus. Based around the last unsold Ferrari Enzo it has been re-bodied in the style one of Ferraris 1960s P Series sports racing cars but with a futuristic feel that avoids retro clichés. The $4 million dollar project was revealed at Pebble Beach in 2006 and shown again at the Paris show that year. The seats were created around the dimensions of the owner and his son; his daughter chose the seat material. With 6 litres, 660bhp this 233mph vehicle was designed to be easier to use and service than the standard Enzo.

Traditionally the BMW Group takes part in the competition for prototypes and concept cars “hors concours”, i.e. they will not be evaluated by the jury. This year two of the stars from the Geneva Auto-Salon will be shown on the Villa d’Este catwalk – the MINI Rocketman and the Rolls-Royce 102 EX.

The MINI Rocketman Concept combines traditional values with innovative technology to redefine the creative use of space which is a fundamental principle of the brand. As a 3+1 seater featuring a unique space concept, 3 doors and an exterior length of just over 3 metres, the highly regarded study points the way to the future in terms of individual driving fun in urban conurbations.

Rolls-Royce produces cars that represent the pinnacle in luxurious motoring for the world’s most discerning customers. However, the company also recognises the need to look to the future and to plan for long-term sustainable growth. An investigation into alternative drive-train options is an important step in that process. With 102EX, also to be known as the Phantom Experimental Electric (EE), it is the company’s intention to carefully test the opinions and reactions to alternative drive-train options of a range of stakeholders including owners, enthusiasts, members of the public and the media.