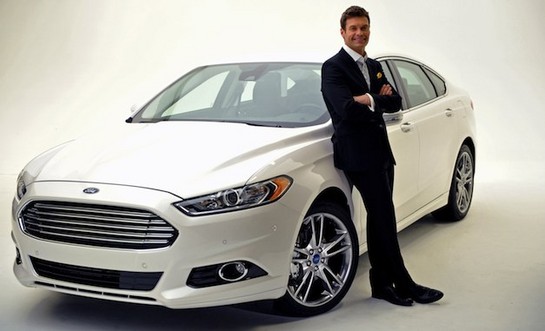 Ford has come up with a new advertising campaign to make sure the public, especially the younger generation, pay attention to the new Fusion. They hired TV and radio host and producer Ryan Seacrest to be the face of a campaign called “Random Acts of Fusion” which introduces the car to millions using TV, Radio, and Social Media ads, before the good-looking car hits showrooms this fall.

This is not the first time Ford is taking a different approach in promoting their cars. Fiesta Movement and Escape Routes are other examples of their out of the box thinking.  Unlike any other program before, Random Acts of Fusion will play out over time through a story arc across a variety of media channels that will be driven by digital and experiential while also including radio, broadcast and social media. Ford calls this ‘transmedia storytelling.’

“We are taking a completely unique approach to introduce the new Fusion with a transmedia program, launching this transformational vehicle that over-delivers with its distinctive blend of style, intelligence and technology,” said Jim Farley, Ford group vice president, Marketing, Sales & Service. “Combining social media, entertainment and unexpected consumer experiences will allow us to connect with audiences through every type of media, making Fusion’s profile larger than ever.”

“It’s a privilege to partner with such a stellar multinational brand as Ford,” said Seacrest. “I’m excited to help Ford bring the Fusion to life through what I believe is going to be a very entertaining and surprising interactive consumer initiative.”