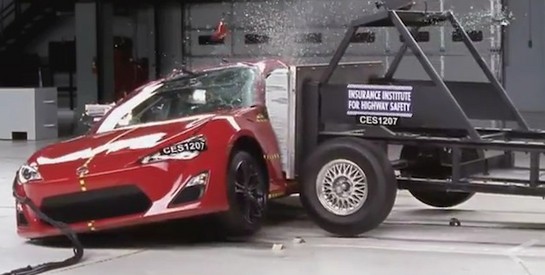 Safety is probably way down the list of priorities for sports cars buyers, but that doesn’t mean car makers can compromise. Nobody buys the Subaru BRZ or Scion FR-S because they are the safest cars in their segment, but it’s heartwarming to know they kinda are. The Japanese twins have been tested by IIHS recently, and they were both awarded as Top Safety Picks.

This particularly matters in a car that people tend to fool around in. The BRZ/FR-S is a lightweight sports car with a low center of gravity, and it tends to move around and dance a little around corners. At 200 hp it hasn’t got that much power to get you in trouble really, but still, it can hurt you if you don’t know what you are doing and push it way beyond it’s fairly high limits.

It is only when you’ve lost control and headed toward a tree sideways that you appreciate Toyota and Subaru’s effort in making this car safe enough for IIHS ‘Good’ rating in overlap frontal, side, rollover and rear impact tests.