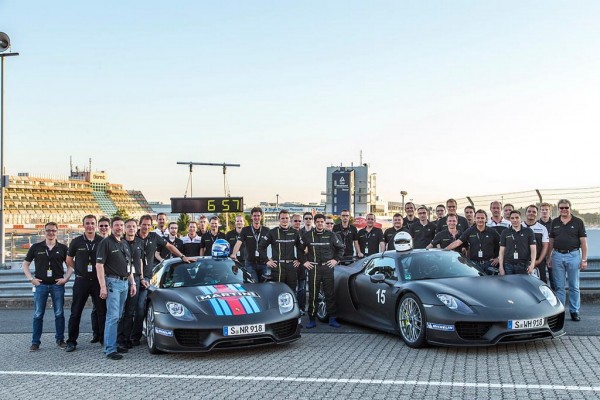 What a way to celebrate a world premiere! On the same day that Porsche 918 makes its debut as a production car, the German car maker announced its official Nürburgring-Nordschleife lap record. And it is fast. Very fast. In fact, it is the fastest ever lap for a car with global road homologation.

Set by Porsche works driver Marc Lieb, on 4 September, Porsche 918 Spyder Nurburgring lap record of 6 minutes 57 seconds is a staggering 14 seconds faster than the previous record. It shows that although the 918 is not as fast as its rivals in terms of top speed, it will give them a good run for their money when the going gets twisty.

Devouring the 20.6 kilometre circuit in that time is quite an achievement. Last time we heard about the McLaren P1 at the ‘Ring, it was still stuck in the 7 minutes neighborhood. And as for the LaFerrari, well that is not yet allowed outside Fiorano.

Porsche 918 Spyder over 111 mph (179.5 km/h) during its record-breaking lap. The 887 horsepower hypercar was equipped with the optional ‘Weissach package’ to further emphasise the circuit driving dynamics, and were also fitted with the standard Michelin tyres developed specifically for the 918 Spyder. To top it all off, it also features the legendary MArtini livery, available as part of the Weissach package. 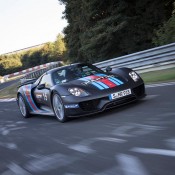 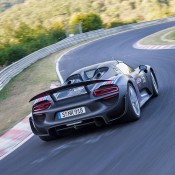 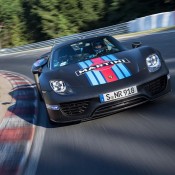 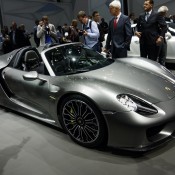 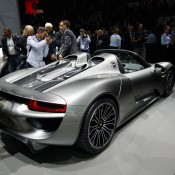 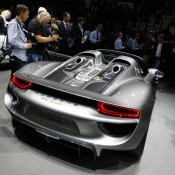