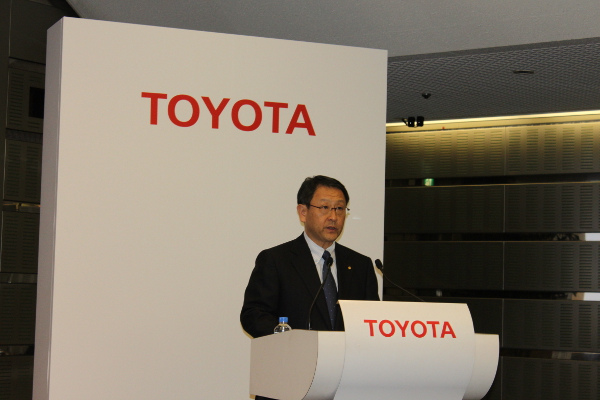 Rumors fueled by official statements abound that Toyota will be bringing two new sports cars to market – one positioned above the Scion FR-S/FT-86, and one below. These cars will form a trifecta of sports coupes, similar to the group of sports coupes that carried Toyota to popularity and profits in the 1980’s and 90’s. This new knowledge has people excited, but also confused about the future of sports models they’d hoped were going to be resurrected.

The new CEO of Toyota, Akio Toyoda, seems to be as ready as everyone else for  a new rear-wheel drive sports coupe, or two. Although the GT86 is fairly new to the brand, two more RWD models are taking one slot above and one below the GT86/FR-S in accordance with plans of the incoming chairman. His plans were outlined as including two new sports cars with the 86 in the middle of both.

More specifically, he plans to make the larger of the cars a successor to the Supra — this model is said to be under development in collaboration with BMW. The smaller of the models is being hinted as a joint effort, but no details were given as to who Toyota would team up with to make it. Some speculate that the smaller of the models might be a MR2 or Celica.

It’s not exactly time to start putting in orders at local dealerships, neither model has actually been given the green light for production.

Next Generation of Supra: Will They or Won’t They?

In the early 2000’s, Toyota ceased production of the Supra. As far back as the conclusion of the latest generation of Supra, talk of replacement models and a new generation have caused quite a stir in the import enthusiast community. The news about the plans being made by Toyota’s future chairman has people wondering if the Supra even stands a chance still of a comeback.

Although conceptual drawings and speculation are in no short supply, the reality of a Supra now seems more unlikely now than ever. If Toyota has a new successor to the Supra in the works, they probably won’t bring this model back into their lineup to murk up the waters for their upcoming sports coupes.

So, why won’t Toyota axe the model forever or confirm its comeback? They want to keep consumers on the hook. The rumors, regardless of what the ultimate truth is, will keep the idea of a Toyota sports coupe on the minds of drivers.

The most current rumor (one started before the rumors about the two new models) is that Toyota will unveil their newest Toyota Supra concept at the 43rd annual Tokyo Motor Show at the end of the year. This is when the world will know, with almost absolute certainty, if the Supra is actually coming back, or if it’s time to let it go.

It’s at this same show that eager Toyota sports car enthusiasts will likely get their first glance at the other models Toyota’s chairman has alluded to. It seems at this point that the best chance the Supra has of a return is being the name on the larger of the sports models planned by Toyota.

Author Jason Lancaster is a huge fan of the Toyota Supra and hopes it will return. He works with Olathe Toyota Parts Center, an online seller of wholesale OEM Toyota parts.