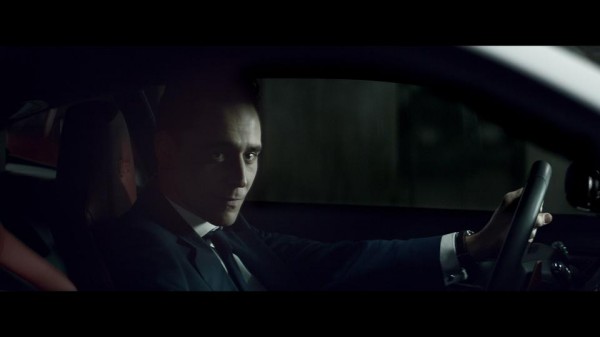 In preparation for the launch of the Jaguar F-Type Coupe next month, the British car maker decided to make yet another big, expensive commercial. And since the previous effort “Rendezvous” proved very successful, they are sticking with the British villain theme and made a two- minute film called “The Art of Villainy.”

The star of the new clip is one of the trio of movie stars that played the villains in Rendezvous, Tom Hiddleston. The Art of Villainy has a Shakespearean air to it, as it begins and end with quotes from John of Gaunt in Richard II by William Shakespeare.  Tom offers a definition of a villain perfectly materialized in the sounds and sight of the Jaguar F-Type Coupe.

“The enormous success of the ‘Rendezvous’ Super Bowl commercial demanded a creative follow-up and, with ‘The Art of Villainy,’ we are able to continue to weave this dynamic storyline with a two-minute film that echoes the artful manner of the campaign’s debut TV spot. In reprising his villainous role, Tom continues to develop his very popular character and create a meaningful impact for the brand,” said Jeff Curry, Brand Vice President, Jaguar North America. “In pairing Tom’s recitation of the classic words of England’s most famous playwright, William Shakespeare, with the British sophistication of Jaguar, we are able to showcase the new F-TYPE Coupe in an unforgettable manner.”

As for the car itself, the Jaguar F-Type Coupe comes in three flavours. There are two V6 models, and a top of the line R version powered by a 550 PS V8 engine. Even though the only difference between this car the F-Type Roadster is the solid roof, a lot of people agree that is a much classier and nicer looking car than the naughty and unruly drop-top.