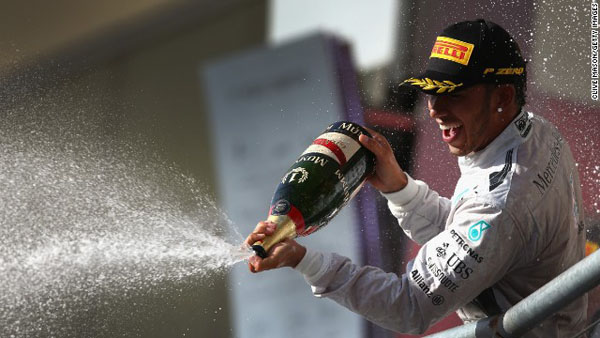 With the pit lane gossip surrounding team administrations firmly shoved aside as cars rolled out for the USA GP qualifying, a fifth consecutive win didn’t entirely look on the cards for Lewis Hamilton.

However, after eating into his teammate’s lead, the Brit threw his Mercedes down the inside of Nico Rosberg at Turn 12, taking his 10th victory of the season.

Despite the win, teammate and title contender, Rosberg proved once again he is a force to be reckoned with, placing his Mercedes on pole for a ninth time this season. Front of the grid didn’t come to the German by the usual fraction of a second either; Rosberg beat the British title leader by four tenths of second, the Briton enduring braking setbacks. 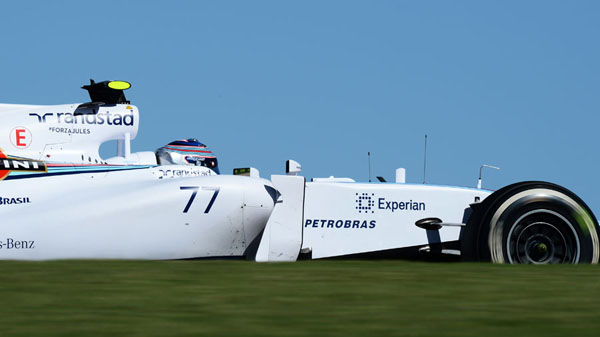 After the dust had settled and teams prepared for Sunday, the second row was once again left aglow with the incandescence white presence of Williams, Valtteri Bottas eclipsing Felipe Massa for third.

Red Bull’s Daniel Ricciardo sat comfortably in fifth, nearly four tenths ahead of Fernando Alonso’s Ferrari. Despite ending up in 12th after a five-place grid penalty for a gearbox change, Jenson Button put in a time good enough for seventh, a spot teammate Kevin Magnussen ended up taking. This also bumped up the remaining field by a place, Kimi Raikkonen’s to eighth, ahead of Adrian Sutil’s Sauber and Pastor Maldonado’s Lotus in tenth.

Although there was talk of Sebastian Vettel missing qualifying due to a penalty, the German decided to put in a lap in Q1 fast enough for ninth – after using a sixth of the season’s allotted five engines, Red Bull decided to take the penalty on the head and only put in limited mileage in practice. Vettel would start from the pit lane whatever the outcome, so despite the penalty, the Milton Keynes outfit used their heads to save engine miles. 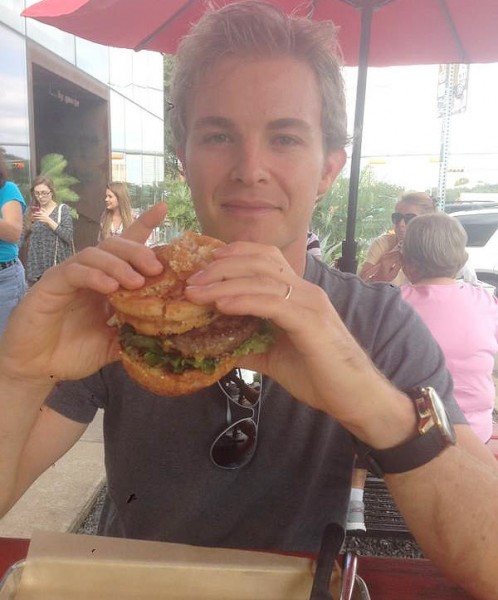 When the lights flashed out in Austin, their wasn’t a single burger to be seen as fans witnessed Nico Rosberg streak away from the line, teammate Hamilton left to defend his second place into the first corner. 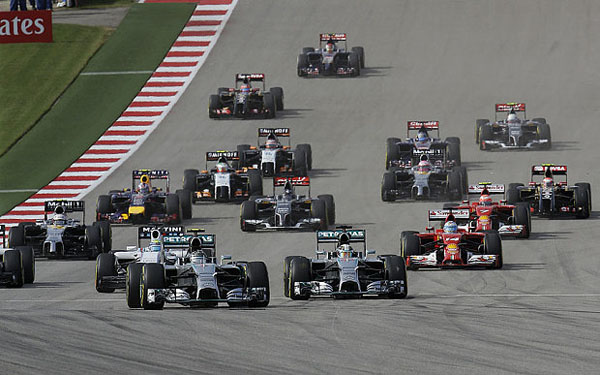 This gave the German a strategic advantage of making his first stop on Lap 15, a lap on before Hamilton. Whilst Rosberg maintained the lead after Hamilton left the pits, the Brit put the hammer down.

The Silver Arrows both traded fastest laps until Hamilton finally started reeling his teammate in. After a decisive fastest lap and big effort, Hamilton placed himself within the DRS zone, and on Lap 24 he made his bold move.

The championship leader dived down the inside at Turn 12, seemingly surprising Rosberg. The German made a move to defend, realising full commitment would break the ‘changing line’ rule before a breaking zone.

Hamilton held the inside line and forced Rosberg to the kerb, ensuring the lead was his. 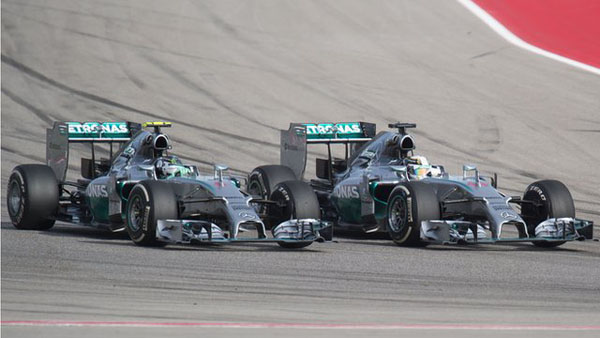 Rosberg maintained a good 1.4-seconds for several laps until Hamilton extended his lead by a further second by Lap 31. This allowed him to control his pace and nurse his tyres until the chequered flag.

It was Hamilton’s 32nd career win, meaning he passed Nigel Mansell for the most British F1 career wins. He has also equalled his great rival Fernando Alonso’s impressive tally. 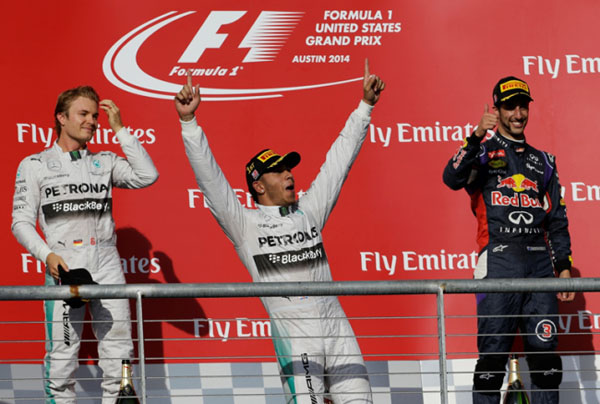 “I’m really grateful to be up front,” he told the BBC. “It is such a privilege to be representing my country and to be at the top of the driver wins is quite special. The car was great today.”

Coming in behind the dominant and virtually unbeatable Mercedes, Ricciardo put in a performance Red Bull could only be proud and excited by for 2015 – the young Aussie has consistently out performed his world champion teammate all season. 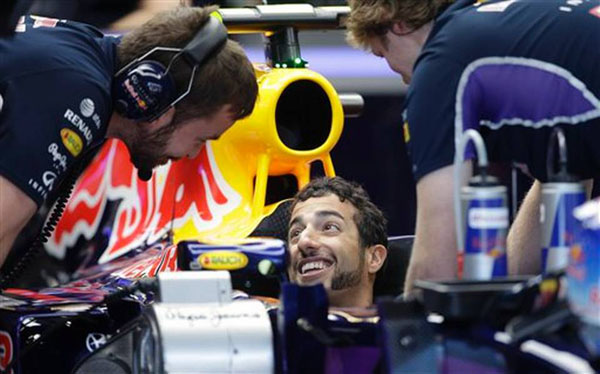 Ricciardo passed Alonso at the restart after a first lap safety car period, and then passed Valtteri Bottas in the first round of pit stops and Massa in the second.

The current world champion scythed his way through the field after a late stop for a set of soft tyres. Vettel gained an impressive seven places as a result after his pit lane start and a strategy requiring pure patience to run two long stints on medium tyres. 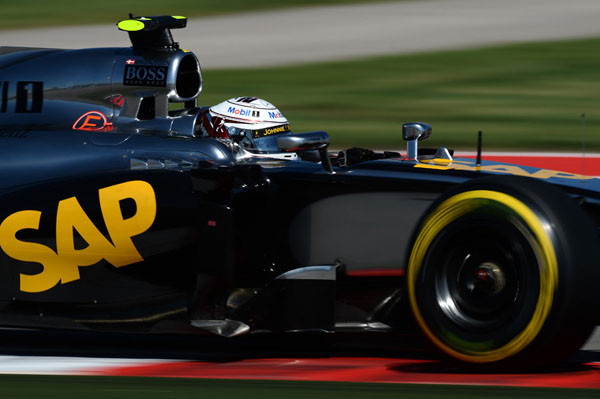 Despite a solid performance, the Frenchman was given a five-second penalty for an aggressive pass on 11th placed Romain Grosjean. This promoted Maldonado to ninth and dropped Vergne to 10th.

Nearing the end, McLaren’s Button struggled on old tyres and dropped from eighth to 12th, four places behind his Finnish teammate. 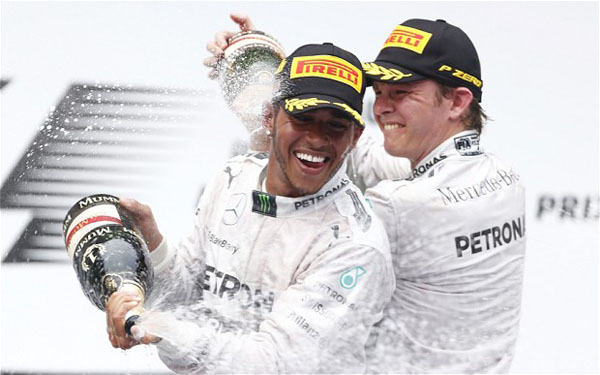 The result extends Hamilton’s lead over Rosberg to 24 points with 75 available in the two remaining races.

I think only reliability issues regarding Hamilton’s Mercedes can save Rosberg’s chances of bridging the gap, but with double points on offer in Abu Dhabi and F1’s unpredictability and fireworks when it really matters, it should be gloves off all the way.