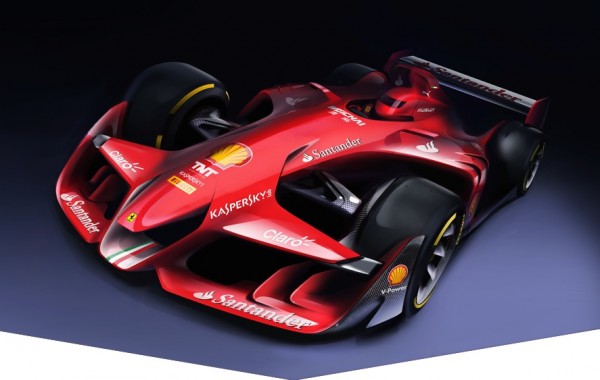 Taking a break from developing a cracking new car for Sebastian Vettel and Kimi Raikkonen, Ferrari Formula 1 designers have come up with the ‘Ferrari Design Formula 1 Concept’. This is what Ferrari believes the F1 cars of the future should look like, and it is awesome almost beyond belief.

The Ferrari Design Formula 1 concept is the Italian’s idea of “an F1 car which not only is technologically advanced, but also captivating to the eye and aggressive-looking.” They wanted to design an F1 machine that looks great without violating the rules aerodynamics and all that. They have nailed it on the head with this concept. Not sure if the unique design is aerodynamically viable, but we don’t really care. Just make F1 cars like this and everybody will watch the races!

We all remember how aero considerations led, not that long ago, to F1 cars developing what can only be described as penises on their forehead. That may have made sense for the engineers trying to make the race cars more efficient and faster. But my God they were ugly. The new Ferrari concept not only looks fantastic, it should also work great. I mean it’s got all the necessary bits like double wing on the front and huge spoiler at the back. Not to sure about the jet engine they’ve put at the back, but integrating the driver’s helmet into the cockpit is sure a nice touch, if a bit impractical.