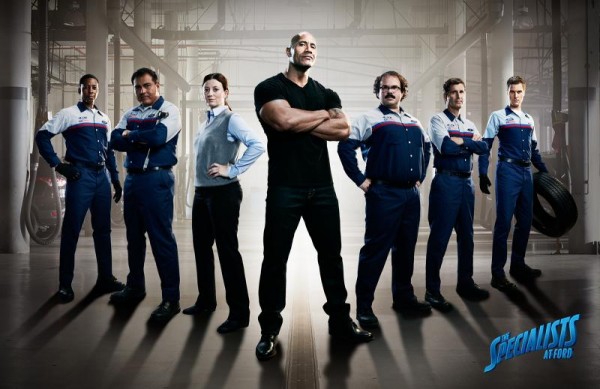 Just when we thought Dwayne Johnson, still known to many as The Rock, cannot possibly add another activity to his busy schedule – which includes starring in movies, producing and starring in TV shows, making documentaries, and spending half a day in the gym – the man announces a new advertising deal with Ford.

As some of you may know, Dwayne Johnson is a big fella who cannot enjoy driving normal supercars like Ferraris and Lamborghinis like every other superstar. His favorite car in the world is Ford F-150 pickup truck, and that gave Ford this idea to hire The Rock to promote Ford Service.

They have come up with  “The Specialists at Ford” advertising campaign in which Dwayne Johnson leads an elite crew of Ford technicians who “has all of the training, diagnostic tools and Motorcraft parts that make servicing your vehicle at your local Ford dealership the right decision,” according to Ford. That is sort of stating the obvious. I mean, when was ever servicing a vehicle the wrong decision?

At any rate, The Rock and “The Specialists” will debut with a TV ad on Monday, October 12, followed by radio, digital and social spots. The multiyear deal will feature a continuous stream of new content being developed. Johnson is known as the Box Office specialist, the man who rescues franchises and make a load of money. He is now going to use his talents to help Ford make more money.