Latest @ MW
Home /The Rock Fancies a LaFerrari But Doesn’t Fit In! 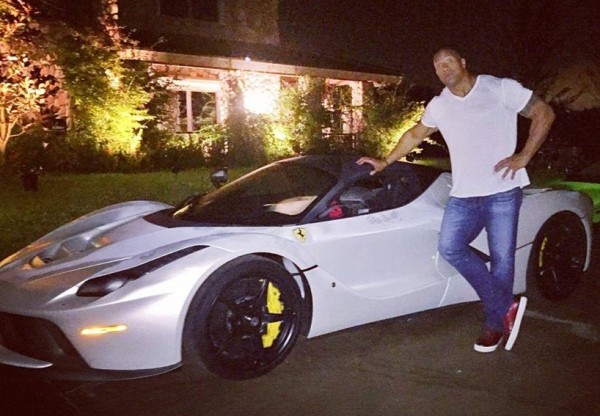 Dwayne The Rock Johnson, also known as the People’s Champ by the fans of WWE, is an all around cool guy who hasn’t changed one bit after his enormous success as a movie star. He still drives pickup trucks like in the olden days… although that could be because he doesn’t fit in anything smaller.

So if you were looking for an excuse not to hit the gym, here’s a good one. Even though The Rock can afford a Ferrari LaFerrari – or any other hyper car for that matter – he can’t have them because due to his sheer size he won’t fit in any of them low and wide speed machines. DJ just posted this photo on his social media, lamenting about this particular disadvantage of being a big guy.

The photo is taken on set of HBO’s Ballers, of which The Rock is an executive producer and the lead character. They are filming season two and evidently they are stepping up the bling factor tenfold. Not that season wasn’t cool enough car-wise, what with the likes BMW i8, Range Rover Sport, Bentley Mulsanne, Ferrari 458 and Lamborghini Aventador Roadster starring in it. But it looks like the new season is going to offer some serious eye candy to the viewers.