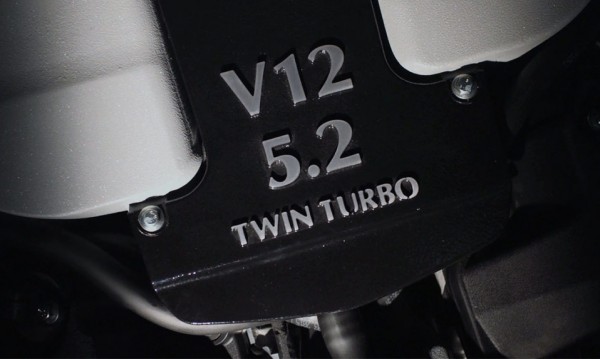 Well, finally it seems that the partnership between AMG and Aston Martin is coming to fruition as the British car maker is teasing us with the noise and cover of their brand-new V12 Twin Turbo engine. It’s a 5.2 liter, and that’s pretty much all that’s known about it for the now.

It was about time Aston retired the old 6.0 liter V12 that’s been powering their cars since the brand’s relaunch in 2003. It is still being used in the latest Vanquish, Lagonda, and V12 Vantage models, and it may still have some life left in it. But they had to replace it, if just for prestige.

The old V12 was created by literally welding two Ford Mondeo V6 blocks together. That was when Aston was owned by Ford and those guys, as you know, have an eco-minded to approach to everything. That is certainly not the case with the new Aston Martin V12 twin turbo engine. Judging by the teaser video, the motor sounds good, and it ought to be at least as powerful as the current unit. So, good times.

The new V12 engine will make its debut in the Aston Martin DB11 later this year. Later on, the current Jaguar-based V8 engine too replaced by brand-new AMG-built units.