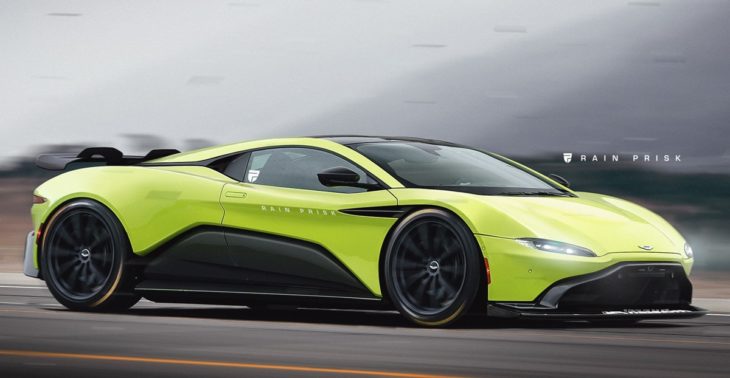 While Aston Martin is doing a good job covering the very top-end of the sports car market with products like the Valkyrie or the Vulcan, they are kind of missing out on a lower tier market that could prove much more profitable. And that is the mid-engine super car segment.

Of course, they already have the Vantage which is a good contender capable of standing its ground against anything Ferrari has to throw at. But if you look at the Vantage next to something like the Ferrari 488 or even a Lamborghini Huracan, and if you put all three on the race track, then you realize the Vantage is not really in the same league as the Italians. The Brit is more of a GT cruiser, whereas the 488 or Huracan are red-blooded, full-on super cars.

That is why we think Aston could do well taking notice of renderings like this one which depicts a Vantage-based Aston supercar. It’s mid-engine, of course, and it looks just as striking, or even more so, than any Ferrari or Lamborghini in this class. The designer has taken cues from the big dog Valkyrie in drawing this car and he hasn’t completely abandoned the Vantage connection. And we have to say the end result is quite stunning to look at. As for what kind of engine such an Aston could have in its mid section, we’re thinking a 700-hp version of an AMG V8…