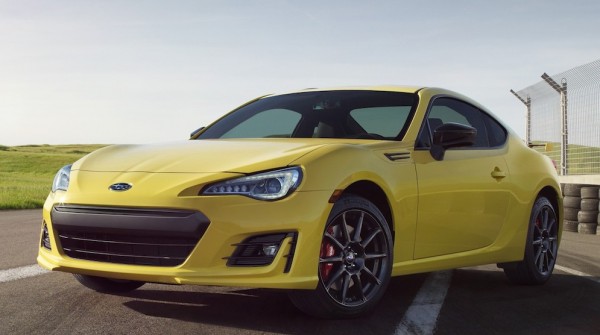 Following the launch of the new 2017 modelyear BRZ in America, Subaru announced the addition of a new special and limited edition to the range. Limited to 500 copies and dubbed Subaru BRZ Series Yellow, the new model will hit the showrooms early next year.

Let us put you at ease from the outset that the limited edition Subaru BRZ Series Yellow does not get a performance upgrade. So if that’s all you care about, you can stop reading now. Subaru and Toyota are still reluctant to address the main issue with this car, which is the lack of power, and continue to fiddle around with bits that are actually perfect the way they are.

So the 2017 Subaru BRZ Series Yellow comes with, as its name suggests, a special yellow exterior and a black leather and Alcantara interior with contrasting yellow stitching on seats, door and dash panels, steering wheel, knee pads and shifter booth, carpeted floor mats, and yellow BRZ logo. Being a 2017 model, the car also gets some new LEDs, a rear spoiler, and a 4.2-in LCD multifunction display as well as dual-zone automatic climate control, Keyless Access with Push-Button Start, dual illuminated visor vanity mirrors, and front door courtesy lights.

In terms of mechanical upgrade, and while the Yellow edition doesn’t get anymore power than the 2017 BRZ’s 205 hp and 156 lb-ft of torque, the car comes as standard with the Performance Package which adds Brembo four-piston calipers and rotors on the front and dual-piston calipers and rotors on the rear, SACHS Performance shock absorbers and black 17: wheels. Thing is though, this stuff probably makes the BRZ’s handling more precise and less drifty, which is not good.