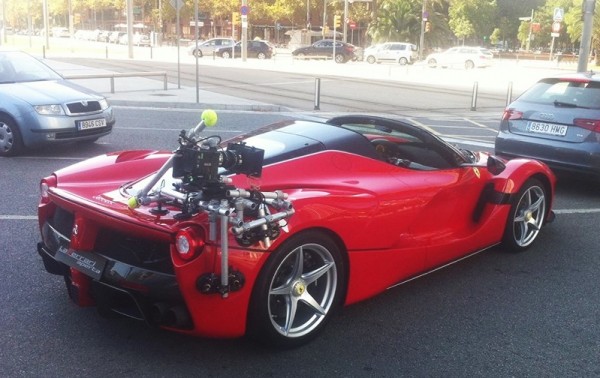 Ferrari doesn’t really make commercials for their cars because they don’t need to. But they do produce sick promotional clips for them, and more often than not they go Spain for this purpose. So car spotters were alert and ready when the new LaFerrari Aperta appeared in their neck of the woods and they went out to beat Ferrari to the punch and publish footage of the car before they even finish filming.

This video offers a pretty good look at the LaFerrari Aperta as it cruises around Barcelona seeking a good location. The camera contraption on the back of the car means the official clip will also include shots of tearing up and down some race track or mountain road. So rest assured, it is going to be good.

LaFerrari Aperta comes with a carbon-fibre hard top and a soft top, a 800 cv V12 ICE (with a specific power output of 128 cv/l) coupled with a 120 kW electric motor (163 cv), for a total of 963 horsepower. Apart from the roof arrangement and some structural upgrades the open-top hypercar is identical to the hardtop, but the word is it costs a hell of a lot more because it is produced in very small numbers.