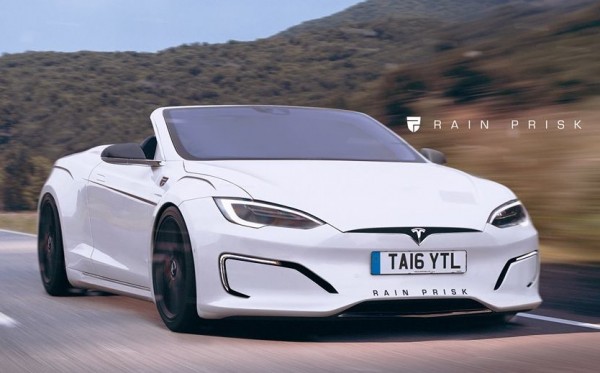 Sometimes independent designers come up with something that astounds even the manufacturer whose car they have digitally manipulated. We are fairly certain that is the case with this Tesla Model S Convertible. Elon Musk is probably devising a plan now to turn this idea into reality.

And we are basing that on how completely, utterly, and undisputedly awesome this Tesla Model S Convertible looks. Penned by Rain Prisk based on the latest facelift version of the electric sedan, the open top Model S has lost its rear doors in this transformation as well as its roof, but it has gained a ton of coolness and beauty. We tip our hats to this designer not just for the idea, but also for the excellent execution.

Tesla Model S Convertible could be a nice addition to the car maker’s lineup. But it makes more sense for something like this to be a standalone model rather than a variant of the Model S. Just imagine those looks with the PD90 motor and the Ludicrous driving mode… that is going to make the likes of Mercedes SL65 AMG and Maserati Grand Cabrio look like little hatchbacks from the middle of last decade!