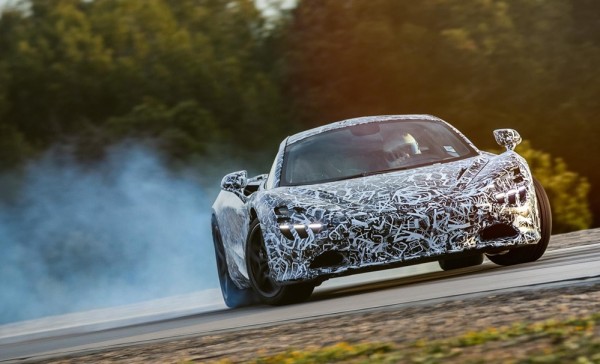 Now that the first picture of McLaren P14 has leaked online and we all know what it looks like if the teasers the company releases are to be interesting they must have to do with power and performance. And that’s exactly what the new teaser is about. It reveals the initial specs of the chassis, mainly the Proactive Chassis Control II system.

To put it in one sentence, the job of Proactive Chassis Control II is to make McLaren P14 extremely good fun to drive. All the boring stuff, like how the system reads the data multiple sensors, which are actually 12 more than on the outgoing 650S, including an accelerometer on each wheel hub, send to it and runs them through its ‘Optimal Controller’ algorithm just to set the correct damping at any given moment, happen behind the scene. What you will experience behind the wheel is a superb level of grip and control without any loss of comfort.

Naturally, an advanced chassis system like the one used in McLaren P14 offers multiple driving modes including Comfort, Sport, or Track. But the system’s party piece is a new McLaren Variable Drift Control mode. It is a menu in the car’s new touchscreen through which you can choose what sort of control the car’s Electronic Stability Control should exercise, thus enabling even the most novice driver to pull spectacular powerslides without killing himself. Needless to say, more advanced river can shut down the control altogether and go nuts.

“Proactive Chassis Control II generates a significant amount of additional grip, but not at the expense of the balance and feel of the car,” explained Mark Vinnels, Executive Director – Product Development, at McLaren Automotive. “The depth and breadth of handling precision and ride comfort in combination with the peerless level of driver involvement in the second-generation McLaren Super Series is simply extraordinary.”