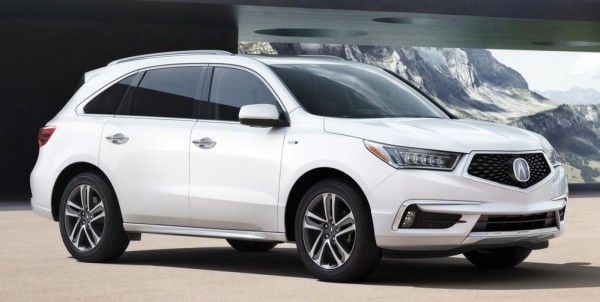 After the launch of the new NSX, Acura now wants to hybridize everything within reach and they began with the MDX SUV. They have come up with the 2017 Acura MDX Sport Hybrid which they refer to as the ultimate MDX, the “most powerful, refined, sophisticated and technologically advanced Acura SUV,” which is remarkable considering it is their first-ever hybrid SUV.

As far as first attempts go, however, 2017 Acura MDX Sport Hybrid is a good one. The SUV is only $1,500 more than a regular MDX but it comes with 30 more horsepower and a 45 percent higher EPA city fuel economy rating. And you get a sophisticated three-motor all-wheel-drive drivetrain just like the one in the NSX supercar. The MSRP for the hybrid is $51,960.

Among the technological highlights of the 2017 Acura MDX Sport Hybrid there are the SH-AWD powertrain with three electric motors and 7-speed dual clutch transmission (7DCT), an advanced Electro Servo braking system, new and model-exclusive Active Damper technology, and an expanded-range Integrated Dynamics System with four distinct modes, including new SPORT+ mode. You get a total output of 321 horsepower and 289 lb.-ft. of torque, corresponding to fuel economy ratings of 26/27/27 mpg (city/highway/combined).

In terms of features, there are two trim levels: MDX with Technology Package and the MDX with Advance Package. Shared equipment include exclusive interior trim, stainless steel sport pedals and feature wood interior accents. Wood trim accents are only available with the Advance Package for the other two MDX variants. The MDX Sport Hybrid with Technology Package includes versatile seating for seven passengers, while the Advance Package features a 6-passenger interior with second-row captain’s chairs and large second-row center console in place of a three-person bench seat.