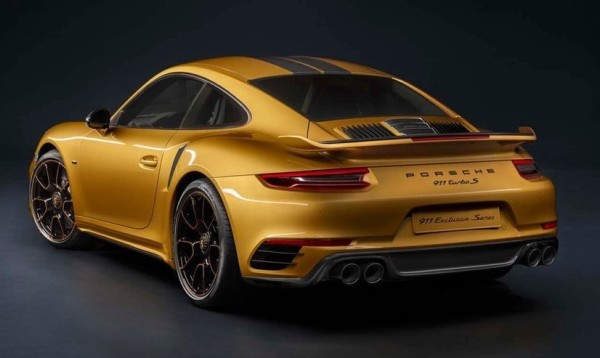 Porsche Exclusive is better known for their one-off, bespoke models created based on individual orders. Now though, they have come up with a special version of the Turbo S which they will produce in limited numbers. It’s called the Porsche 911 Turbo S Exclusive Series and it is one of the most flamboyant versions of this car ever.

The biggest highlight of Porsche 911 Turbo S Exclusive Series is, obviously, its Golden Yellow paint job complemented with  two carbon-weave strips that contour the roof and bonnet and components in carbon, like the bonnet, roof and side skirts. The wheels are also garnished with the golden hues of the body. You could order this car in other colors, but we have a feeling the gold is going to be the most popular. The Exclusive Turbo S also comes with matching accessories such as leather Exclusive Series luggage and a Porsche Design Chronograph. The watch, just like the car, is limited to 500 units.

As for the interior, Porsche 911 Turbo S Exclusive Series highlights include 18-way adjustable sports seats covered in two layers of perforated leather, two stripes in Golden Yellow, Turbo S stitching on the headrests, Alcantara roof lining with a Golden Yellow double-stripe look, and carbon door entry guards with illuminated Exclusive Series lettering. Although it is mostly the looks that will sell this model Porsche went ahead and gives it some extra power as well to round up the exclusive treatment. This Turbo S packs 607 horsepower and 750 Nm of torque, and has as standard PCCB ceramic brake system, Porsche Active Suspension Management (PASM) and the Sport Chrono package, as well as rear-axle steering and Porsche Dynamic Chassis Control (PDCC).