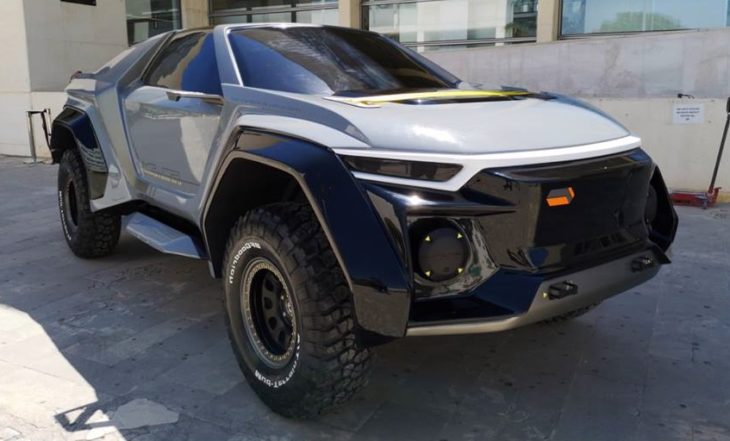 The name DSD Design & Motorsport probably does not ring a bell for you. They are a Spanish firm with a new and fresh take on how supercars should look and operate. After receiving much praise for their first product, the Boreas hybrid hypercar, they are now working on a super SUV, called the Golem.

The Golem is pitched as a SUV, though it kind of looks like a pickup truck, with a very high ground clearance, muscular body, huge wheels, and aggressive lines everywhere. But you kind of expect that when the name of the thing is Golem. The vehicle is in prototype stage, or design concept to be more precise, with the first 1:1 model getting its first outing at the University of Valencia during a design competition.

The Golem SUV is clearly designed to impress and intimidate. Every surface features an exaggerated, maybe even caricatured, twist – whether it’s the sculpted bumper we’re looking at, or the awesome fenders which would have looked more at home on a tank, or the pentagon-shaped doors. There is a nice symmetry to the design of the Golem, and yet it doesn’t look boxy like most other macho SUVs.

As for the specs and technical details, there is none. As mentioned, the Golem SUV is in early prototype stages and it will be a while before we see it anywhere near a road. But having seen DSD’s previous project, you can rest assured that the SUV will boast a similarly powerful engine and unrivaled off-road capabilities.