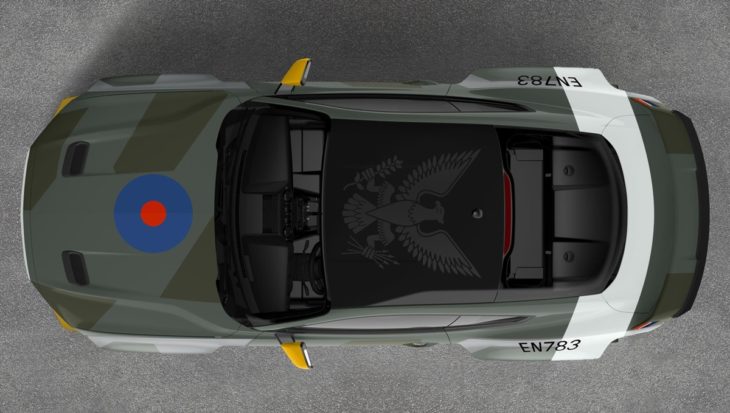 At this year’s Goodwood Festival of Speed Ford will remind the Brits about a historical fact they have apparently forgot. They will be unveiling the one-off Eagle Squadron Mustang GT, a car designed as a tribute to American fighter pilots who served in the Royal Air Force during World War II.

So there will probably be some gloating and some good-natured banter by the Americans present at the event, and that is fine. Made by Ford Performance and Gittin’s RTR Vehicles, backed by ace drifter Vaughn Gittin Jr., the Eagle Squadron Mustang GT is painted in the camo design of the Royal Air Force Eagle squadrons flown by American pilots during the war years. Besides the appearance, which is yet to be fully revealed, the car also features add-ons such as a RTR carbon fiber wide-body kit and Tactical Performance suspension package, plus a 700-horsepower 5.0-liter V8 with a Ford Performance supercharger.

Following its debut at the Goodwood FoS, the Eagle Squadron Mustang GT will be shipped back to the U.S. where it will be auctioned off at on July 26 during the EAA AirVenture Oshkosh fly-in with the proceeds going to support the EAA’s youth education programs.

“Supporting young pilots through the EAA charity auction reflects Ford’s aviation history, tracing back to the company’s early days and the Arsenal of Democracy during WWII,” said Darrell Behmer, Ford Mustang design chief. “The Eagle Squadron Mustang GT build with Vaughn and the Ford design team is a great way to honor our heroes and keep the spirit of aviation alive for the next generation of American pilots.”