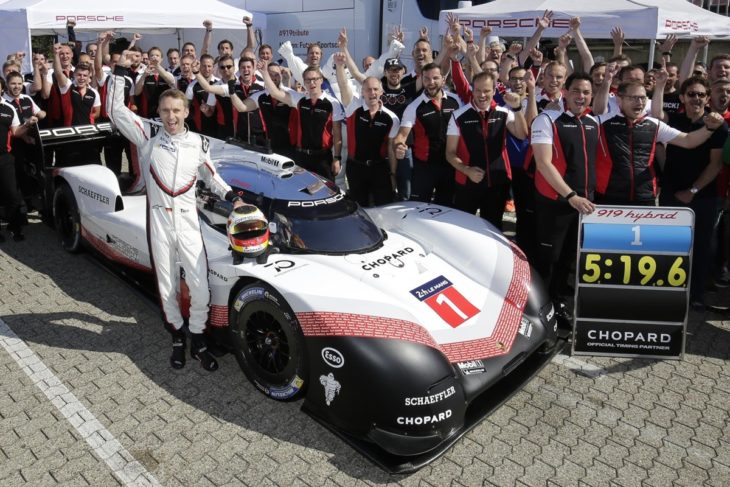 Yesterday a group of Porsche racing drivers and engineers congregated with a Porsche 919 Hybrid Evo at the Nurburgring Nordschleife, causally trying to set a lap record. They went on to break the all-time lap record for the Green Hell with a time of 5 minutes and 19.55 seconds.

That is near as makes no difference a full minute (okay, 51.58 seconds) faster than the previous record of 6:11.13 minutes set by Stefan Bellof 35 years ago. That makes the Porsche 919 Hybrid Evo the new king of the Hell. The record was set by Timo Bernhard, five-time overall winner of the Nürburgring 24-hours, two-time outright winner of the Le Mans 24-hours and reigning World Endurance Champion with the Porsche 919 Hybrid. I think it is fair to say he was the right man for the job!

Bernhard’s driving skills aside, a big part of this success is down to the technical brilliance of the Porsche 919 Hybrid Evo. The racing machine boasts a hybrid powertrain with a system output of 1160 hp, and it weighs only 849 kilograms. No wonder then that during the record-breaking lap it hit a top speed of 369.4 km/h (229.5 mph). The good news is that the hybrid technology from this car is trickling down to Porsche road cars as well.

LMP Team Principal Andreas Seidl commented: “As a race team we constantly search for challenges that push a car, driver and team to operate on the limit. Conquering the “Green Hell” definitely provided such a challenge. Since last winter we were preparing for that task together with our tyre partner Michelin – painstakingly and with a great deal of respect for this track. Today we have shown the full potential of the 919 Evo. Congratulations to Timo for his sensational drive. Being a record winner at the Nürburgring, Timo was the logical choice for the job. Balancing attack and caution at all times was mandatory on this circuit. Safety is the highest priority. In this regard, I also like to thank the Nürburgring team. Porsche cultivates a long and deep relationship with the ‘Ring. Record attempts wouldn’t be possible without the highly professional track support.“