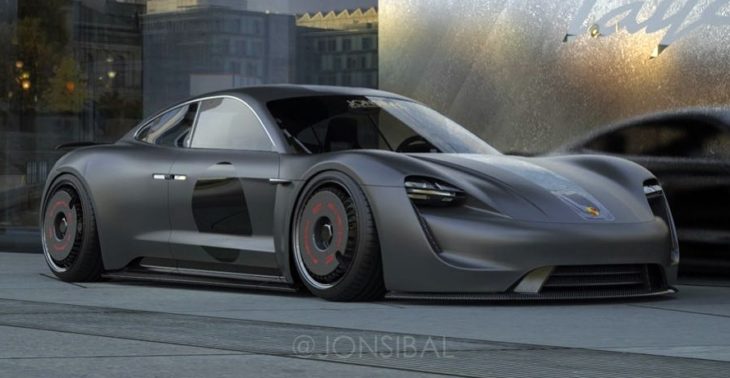 It was only a few days ago when Porsche announced that the production version of the Mission E concept would be called the Taycan. But already independent designers have had a go at modding and upgrading this thing. This is the very first modified Porsche Taycan, and it looks rather interesting.

Penned by famous designer Jon Sibal, the custom Porsche Taycan you see here is slammed and murdered out. I know those sound like dirty words and completely irrelevant as far as tuning is concerned. But those are slang terms for having the car lowered on a set of big wheels and having the paint and the exterior accents finished in black. It’s right on the money too, because chances are this will be the treatment the first tuned Taycan will receive in the real world.

Seeing as Porsche Taycan is an electric car, visual mods might be the extent of modifications you can expect. Tuners can mess around with wheels and suspension and paint jobs, but there is very little they can do to increase the output of the already potent electric motor or increase the range provided by the batteries. In any case, you wouldn’t want to alter the technical specifications of the car. What you want is thismatte black look, that stance, and those weird but cool “carbon fiber turbo fan” wheels.