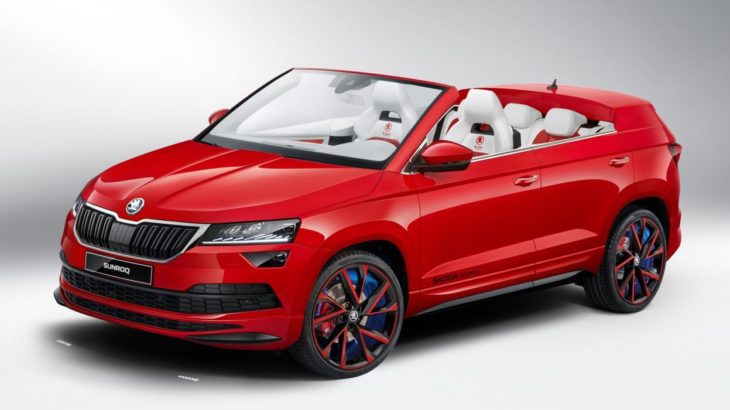 The Skoda Vocational School in Czech Republic is a big fan of letting its student play around with outlandish ideas and even make some of them into real things. This is the fifth concept made by the students, a cabrio version of the Karoq SUV they call the Skoda Sunroq.

The name was chosen by the brand’s fans on social media and captures the character of the open-top SUV as the perfect utility car for the summer. Although when you think about it, when the sun is beating down on yo don’t exactly want it on your head, do you? In any case, to create the Skoda Sunroq the students cut the head of a regular Karoq which must have been great fun. We reckon some real engineers then did some structural work on the car to make sure it doesn’t fall apart. The Sunroq is a functioning concept.

People have been obsessed with the idea of a convertible SUV since the niche was invented. On paper, it makes a lot of sense. The sport utility vehicle with a fold-away seems to be the car for every occasion. But for some reason, mainly the way they look, convertible SUV have never caught on. Even when the big players like Range Rover made one in form of the Evoque Convertible it didn’t really work and not many people showed a lot of enthusiasm about it. Perhaps the ideal form for the SUV is the TArga top, something like what Jeep has been offering for the Wrangler for many years.