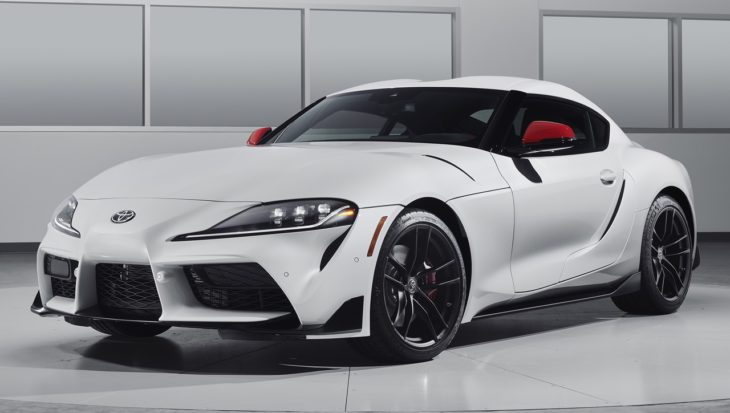 The 2019 edition of the North American International Auto Show may not have had the allure of the previous shows, what with the German luxury makers skipping it altogether, but it did include a number of remarkable debuts that made the event worth going to for those who did. Here we take a quick look at the top three greatest debuts from the 2019 NAIAS, including the new Toyota Supra, the awe-inspiring new Shelby GT500, and the kind of ordinary but massively important 2020 Ford Explorer.

So let’s begin with the hottest car of 2019 NAIAS, the all-new Toyota Supra. This car was so highly anticipated, it completely overshadowed its German sister, the new BMW Z4. Nobody even care about that car anymore, even though it shares a big chunk of its underpinnings with the Japanese hottie. The 2020 Supra has all it needs as the righteous heir to the throne of that revered nameplate. From the emotional design which has just the right amount of retro to make it cool, to the BMW-tuned chassis and suspension, to the great choices of engines which include a 3.0 liter inline six-cylinder, this bad boy is every petrolhead’s wet dream, especially as it cost around 50 grand for a base model and 55 grand for a loaded Launch edition. Granted, it is twice what the GT86 costs, but it is four times the car. And it is significantly cheaper than the Z4, which is not even half as cool.

The next big debut at the 2019 NAIAS Detroit Motor Show was a new version of the wildest pony car of them all, the Shelby GT500. Based on the latest iteration of Mustang GT, this magnificent beast is the most powerful production Ford ever featuring a 2.65 liter supercharger on top of a 5.2 liter V8 engine. That setup is good for 700-plus horsepower, channeled to the rear wheels via a TREMEC 7-speed dual-clutch transmission. As amazing as the GT500’s performance is as a day to day super-muscle car and the occasional dragster, the best thing about this car is the way it looks. This generation of the Mustang is not an easy car to love design-wise, but the changes Ford Performance designers have made to it, and of course the GT 500 traditional paint scheme and stripes, have turned it into an extraordinarily beautiful machine. The Challenger Hellcat might have stolen the ‘Stang’s thunder for a while, but this car definitely gets it back.

The third biggest highlight of the 2019 NAIAS was the new Ford Explorer. Actually this space should have belonged to the 2020 BMW 7 Series, but as mentioned above, Audi, Mercedes and BMW decided not to turn up at this year’s event, and Bimmer revealed the new 7er elsewhere. In any case, the Explorer is also a remarkable car as one of the best selling family SUVs in the U.S. The new model has a more streamlined design as well as upgraded interior and technology. The truth is though, the regular 2.3-liter EcoBoost model is just too boring. That is why we want to tell you about the sporty ST version, which packs a specially tuned 3.0-liter EcoBoost with 400 hp and 415 lb.-ft. of torque. Now that’s the kind of power that makes things interesting. The St also comes unique styling cues and a sporty interior, not to mention the unique Ford Performance blue paint job. Of course, those interested in efficiency can go for the hybrid version.