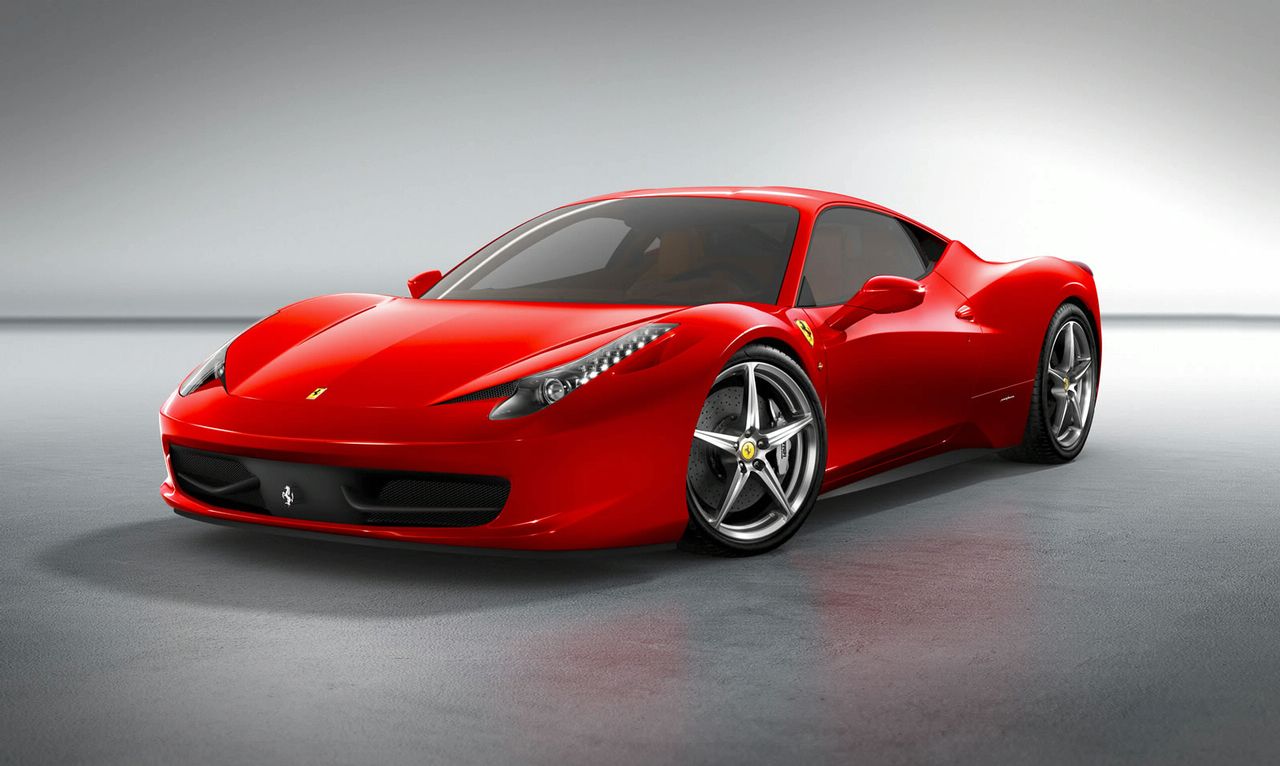 Ferrari has finally dropped the curtain on the F430’s successor, called Ferrari 458 Italia. And our first impression is anything but wow! 458’s body is a creation of PinninFarina, and as far as aerodynamics matter, it is a masterpiece generating tons of downforce with out wings and splitters. But as something eye-catching and beautiful, I’m not so sure.

Jeremy Clarkson once said that after F355, Ferrari has never made a beautiful car. We only think they are beautiful because they are Ferraris! 458 is a form-following-function sort of car. You notice those holes beside headlights, they provide air for the cooling system and that big mouth of it also plays a Major part to keep it on the ground at high speed. The whole car has a compact form for better aerodynamic efficiency.

At the front, it’s all macho and angry and industrial. But at the back, it looks like a toy car! You get California style tail lights, an artistic diffuser and three big exhaust pipes right in the middle! It is quit supercar-ish but not so elegant.

Ferrari 458 Italia is powered by a new 4.5 liter V8 engine 570 hp and 540 nm of torque which which uses about 13.7 liters of fuel per 100 KM. Thanks to extensive use of aluminum it weights 1380 kg, not exactly featherlight but with that much power at your disposal, it promises blistering performance. Like the 430, the new car is also full of electronic systems such as a new E-diff drivetrain and direct steering system. company claimed numbers for 0 to 100km/h and top speed are 3.4 seconds and 324 km/h.

So as for the technicalities, 458 Italia is what you expect a Ferrari to be: Brilliant!

Based on what we see from the picture of the cabin Ferrari has released, it seems to be inspired by the California. Like that car the dashboard is quit funky and modern and every single part of it is new.

2010 Ferrari 458 Italia will make its public debut at this year’s Frankfurt Motorshow in September.

Here you can watch a video of the Ferrari 458 Italia:

Maranello, July 28th 2009 – While it’s true that every Ferrari is innovative by definition, it’s equally true that in the course of the Prancing Horse’s history, certain cars have marked a genuine departure from the current range. This is very much the case with the Ferrari 458 Italia, which is a massive leap forward from the company’s previous mid-rear engined sports cars.

The new model is a synthesis of style, creative flair, passion and cutting-edge technology, characteristics for which Italy as a nation is well-known. For this reason Ferrari chose to add the name of its homeland to the traditional figure representing the displacement and number of cylinders.

The Ferrari 458 Italia is a completely new car from every point of view: engine, design, aerodynamics, handling, instrumentation and ergonomics, just to name a few.

A two-seater berlinetta, the Ferrari 458 Italia, as is now traditional for all Ferrari’s road-going cars, benefits hugely from the company’s Formula 1 experience. This is particularly evident in the speed and precision with which the car responds to driver inputs and in the attention focused on reducing internal friction in the engine for lower fuel consumption than the F430, despite the fact that both overall displacement and power have increased. However, Ferrari’s track experience makes its presence felt in the 458 Italia not only in terms of pure technological transfer but also on a more emotional level, because of the strong emphasis on creating an almost symbiotic relationship between driver and car. The 458 Italia features an innovative driving environment with a new kind of steering wheel and dashboard that is the direct result of racing practice. Once again input from Michael Schumacher – who was involved from the very start of the 458 Italia project – played an invaluable part.

The Ferrari 458 Italia’s Pininfarina design provides further evidence of the complete departure from the past that this new car hails. The Ferrari 458 Italia has a compact, aerodynamic shape, underscoring the concepts of simplicity, efficiency and lightness that inspired the project. As with every Ferrari, the car’s styling has been very heavily influenced by the requirements for aerodynamic efficiency, as can be seen from the downforce of 140 kg at 200km/h generated by the new model. The front features a single opening for the front grille and side air intakes, with aerodynamic sections and profiles designed to direct air to the coolant radiators and the new flat underbody. The nose also sports small aeroelastic winglets which generate downforce and, as speed rises, deform to reduce the section of the radiator inlets and cut drag.

The new 4499 cc V8 is the first Ferrari direct injection engine to be mid-rear mounted. It has a very low piston compression height typical of racing engines which contributed to achieving its compression ratio of 12.5:1. Equipped with the traditional flat-plane crankshaft, the engine delivers 570 CV at 9000 rpm and, with an outstanding power output of 127 CV/litre, sets a new benchmark not only for the whole Ferrari range and the history of company, but also for the entire market segment. Maximum torque is 540 Nm at 6000 rpm, over 80 per cent of which is available from 3250 rpm. Specific torque is a record 120 Nm/litre. However, what is truly extraordinary is the amount of torque available while still maintaining high levels of power at low revs.

The car’s soundtrack is also typical Ferrari, with an exciting, powerful growl emerging from the engine before it channels through to the exhaust’s three rear tailpipes.

The 458 Italia is equipped with the seven-speed dual-clutch transmission which increases performance whilst providing very smooth shifts even at full throttle. The engineers have developed specific, sportier gear ratios to match the power and torque curves of the new V8, guaranteeing high torque even at lower engine speeds and allowing the car to reach its maximum speed in top gear.

This new Ferrari is also a major leap forward when it comes to cutting emissions. Despite the fact that the new engine is significantly more powerful than the V8s that preceded it, the Ferrari 458 Italia produces just 320 g/km of CO2 and fuel consumption is 13.7 l/100 km (combined cycle), the best in the entire segment.

The engineers also focused on weight reduction during the design phase for similar reasons. Consequently, the Ferrari 458 Italia has a dry weight of 1380 kg with a power-to-weight ratio of 2.42 kg/CV. Weight distribution is also optimal with 58 per cent over the rear axle. The result of the engineers’ endeavours can be summed up in to two simple statistics which together perfectly encapsulate the Ferrari 458 Italia’s exceptional performance: 0-100 km/h acceleration in under 3.4 seconds and a maximum speed in excess of 325 km/h.

For the new chassis, once more in aluminium, Maranello’s engineers incorporated various types of advanced alloys along with aerospace industry-derived manufacturing and bonding techniques.

With regard to vehicle dynamics, the Ferrari 458 Italia’s suspension features twin wishbones at the front and a multi-link set-up at the rear tuned for maximum roadholding and superlative handling. Along with a more direct steering ratio, the 458 Italia thus offers extremely rapid turn-in and body control whilst maintaining superior ride comfort.

The integration of the E-Diff and F1-Trac (now controlled by the same ECU) and their respective mappings is even greater, resulting in a 32 per cent increase in longitudinal acceleration out of corners compared to previous models. The evolution of the control logic, with even faster and more accurate calculation of levels of grip, ensures even greater roadholding, better handling and ease of control on the limit.

The same ECU also governs the high-performance ABS, providing even more precise control over the logic threshold and greater efficiency. The brakes also feature a prefill function whereby the pistons in the callipers move the pads into contact with the discs on lift off to minimise delay in the brakes being applied. This combined with the ABS has cut the 100-0 km/h braking distance to a mere 32.5 metres.

The Ferrari 458 Italia’s interior is another area of the car that exalts its sporty personality. The driver is welcomed by a new layout and a revolutionary ergonomic interface where the main controls are all clustered on the steering wheel.

With the Ferrari 458 Italia, Maranello has brought a highly distinctive new car to its 8-cylinder range. The company now offers two models that share a common, race-derived DNA, both exceptionally sporty and fun to drive in true Ferrari tradition, but aimed at two very different kinds of client. While the Ferrari California was created for owners requiring a more versatile sports car with a practical edge, the 458 Italia is designed for owners for whom the priority is uncompromising on-road performance with occasional track day capability, but who still demand a car that is useable in day-to-day driving like all Ferrari’s recent models.