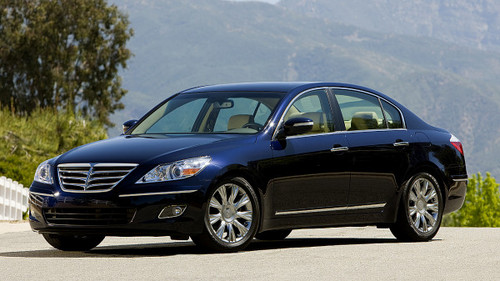 Yet another proud moment for Hyundai as their amazing Genesis sedan receives Insurance Institute for Highway Safety (IIHS) certification as the “TOP SAFETY PICK”. This means the the big and luxurious Genesis has earned good an above rating for front, side, rollover, and rear crash protection.

“Genesis was designed to be one of the safest vehicles on the road and includes features such as ESC and Hyundai’s first electronic active front head restraint system, which helps prevent whiplash,” said Derek Joyce, manager of product planning, Hyundai Motor America.

The 2009 Genesis had also won this award but since the rules become harder every year, the 2010 model is also adjusted accordingly. For instance this year a roof strength test has been added, so the Genesis roof structure is improved to cope.

The other IIHS “TOP SAFETY PICK” standards are stringent as well — the institute’s frontal crashworthiness evaluations are based on results of 40 mph frontal offset crash tests. Each vehicle’s overall evaluation is based on measurements of intrusion into the occupant compartment, injury measures recorded on a dummy representing a 50th percentile male in the driver seat, and analysis of slow-motion film to assess how well the restraint system controlled dummy movement during the test.

Side evaluations are based on performance in a crash test in which the side of a vehicle is struck by a barrier moving at 31 mph. The barrier represents the front end of a pickup or SUV. Ratings reflect injury measures recorded on two instrumented dummies representing a small female, assessment of head protection countermeasures, and the vehicle’s structural performance during the impact.

Rear crash protection is rated according to a two-step procedure. Starting points for the ratings are measurements of head restraint geometry — the height of a restraint and its horizontal distance behind the back of the head of an average-size man. Seat/head restraints with good or acceptable geometry are tested dynamically using a dummy that measures forces on the neck. This test simulates a collision in which a stationary vehicle is struck in the rear at 20 mph.